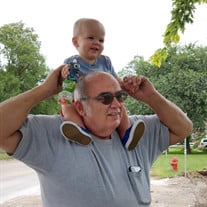 Rick A. Berry, 62, of Minden, passed away on Sunday, September 29, 2019 at CHI Health – Good Samaritan in Kearney. Celebration of life services will be held at 10:30 a.m. on Thursday, October 3, 2019 at the Minden Opera House with the Rev. Jim Reier officiating. Private family inurnment will be held at a later date. There will be no visitation as the family has honored Rick’s wishes to be cremated. Memorials in Rick’s honor are kindly suggested to the family for later designation. Craig Funeral Home is in charge of the arrangements. Rick Allen Berry was born on January 13, 1957 in Minden, Nebraska to Dale and Elaine (Etzelmiller) Berry. He grew up in Minden and graduated from Minden High School with the class of 1976. Rick was united in marriage to Kay L. Molzahn on June 1, 1984 in Minden and to this union, four children were born: Kendra Kay, Jessica Lynn, Travis Scott, and Brian Dale. The family made their home in Minden where he was employed by Reed Construction, Gemini Housing, Burgess Well, and most recently, Royal Engineered Composites, where he worked for the last 35 years. Rick enjoyed spending time with his family and his grandchildren. He was a handyman and there wasn’t a thing he couldn’t fix. He enjoyed helping anyone he could. He loved riding his motorcycle. He took pride in having the greenest yard on the block and had a green thumb. He grew a big garden each summer. Rick was the pickiest eater ever, but everything he loved he put peanut butter on and it had to be Skippy! He loved Nebraska football and volleyball. Those left to cherish his memory include his wife, Kay of Minden; sons, Travis Berry of Gillette, WY, and Brian Berry and special friend Racheal Spargo of Heartwell; daughter, Jessica Shrader and husband Logan of Minden; grandchildren, Cadence Shrader, Xavier Berry, and Elliott Shrader; brother, Steve Berry and wife Shellie of Kearney; sisters, Susan Holsten of Grand Island, and Beverly Johnson and husband Wynn of Iowa City, IA; as well as a host of nieces, nephews, other relatives and friends. He was preceded in death by his parents, Dale and Elaine Berry; father and mother-in-law, Kenneth and Opal Molzahn; daughter, Kendra Kay Berry; nephew, Ian Molzahn; and brother and sister-in-law, Paul and Brenda Molzahn. Tributes of memory can be shared with the family at www.craigfunerals.com.

The family of Rick A. Berry created this Life Tributes page to make it easy to share your memories.

Send flowers to the Berry family.