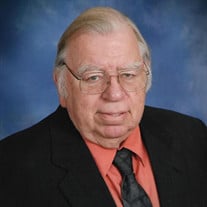 Robert Lee “Bob” Casper, 77, of Lincoln, NE (formerly of Hildreth, NE) entered into eternal rest at High Plains Memory Care Facility in Lincoln on August 11, 2020. Visitation will be Friday August 14, 2020 from 3 P.M. to 7 P.M. at Trinity Lutheran Church in Hildreth, NE., with the family present the entire time. Graveside services will be held Saturday August 15, 2020 at 11:00 A.M at the Hildreth Cemetery with the Rev. Caroline Keenan officiating. The current guidelines for faith-based services will be followed and the use of a face mask is encouraged. Please feel free to come dressed casually and bring a chair for comfort. In lieu of flowers, the family requests memorials be given to Trinity Lutheran Church of Hildreth, Hildreth Volunteer Fire Department, Hildreth Lions Club, The Windcrest Assisted Living Facility-Lincoln, NE, or to Hospice Community Care of Lincoln, NE. Craig Funeral Home is in charge of the arrangements. Bob was born in Minden, NE to George Jr. and Marie (Kruse) Casper August 31, 1942. He was baptized as an infant, confirmed and grew up attending St. Peter’s Lutheran Church of Hildreth. Bob attended Hildreth Public Schools graduating in 1960. He attended 1 ½ years of college in Kearney, NE at Kearney State College. Bob married Barbara (Barb) Knuth of Oxford, NE, October 27, 1963 at the First Methodist Church in Oxford, NE. The first seven years of marriage Bob and Barb lived in Kearney where Bob was a member of the First Methodist Church in Kearney and taught Sunday School. He was employed by the Nebraska Rehabilitation Center for Boys in Kearney for several years. Bob was the manager of Chef La Lonn’s restaurant, sold Life Insurance and worked for Central States Distributors out of Lincoln. In 1971, Bob and Barb moved to Hildreth where they owned and operated Bob and Barb’s Café and Bar for 13 ½ years. They also owned and operated Casper’s Sundries for several years. Bob was a Pioneer Seed Dealer from 1983-1999. In February of 1983 Bob became the co-owner and manager of 4 Season’s Farm Supply under a partnership with his brothers-in-law, Dewey, Steve and Stan Knuth. In 1997, Cargill bought the operations. Bob continued to be the manager of the facility until the closing of the Hildreth Cargill plant in 1999. Bob was a member of Trinity Lutheran Church in Hildreth. He served on the St. Peter’s Lutheran Church Council for many years before the merger of the Hildreth Churches. He was a member of the Hildreth Volunteer Fire Department and a CPR instructor through CTC in Hastings, NE teaching classes at the Hildreth School to adults and 6th grade through 12th grade students. Bob was also a member of the Hildreth Lions Club from 1971 to present and served on the board of directors. He also served on the Hildreth town board for 9 years. In his retirement he worked for Bauer Repair of Hildreth and drove bus for the Wilcox-Hildreth school system. Survivors include: son, Bryon Casper of Hildreth; daughters, Brenda and her husband, Darrell Wingert, of Winchester, KY, and Becky and her husband, Brent Anderson, of Lincoln; grandchildren, Brittney Casper of Denver, CO, Brook Casper of Hildreth, Danielle Bigras and Alex Bigras of Cheyenne, WY, Dallas Wingert of Winchester, KY, and Brendan and Brady Anderson of Lincoln; special family friends, Mike and Shawna Erbsen of Kearney, NE, and Trevor Erbsen of Rapids City, SD, Heike Klien of Biebertal Germany, Ginger Zahl of Axtell, Ka Lee Zahl of Hildreth, and Jake Zahl of Wilcox; as well as several extended relatives and close friends. Tributes and memories can be shared with the family at www.craigfunerals.com.

The family of Robert "Bob" L. Casper created this Life Tributes page to make it easy to share your memories.

Send flowers to the Casper family.