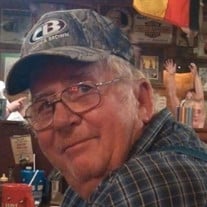 Robert B. Hauver, 76, of rural Orleans, passed away on Friday, June 11, 2021. A celebration of life gathering will be held from 5:00 to 7:00 p.m. on July 17, 2021 at Gremlin Cove Shelter House in Republican City. The family has honored Robert’s wish for cremation. Memorials are kindly suggested to the family for later designation. Craig Funeral Home in Minden is assisting the family. Robert was born on October 25, 1944 on the family farm in Phillips County, Kansas to Dell and Daisy Belle (Wilford) Hauver. He grew up south of Naponee and attended Sumner Grade School in Kansas. He later attended Naponee Senior High School where he graduated with the class of 1962. He was united in marriage to Linda May Schriner on May 25, 1963 in Franklin, Nebraska and to this union, four children were born: Brenda May, Glenda Sue, Richard Lee and Lesley Ann. The family made their home near Naponee where Robert was employed at the Co-op Elevator in Naponee, the U.S. Forestry Service in Republican City, and later by the Harlan County Roads Department, while living at the farm near Orleans. Robert retired from the Harlan County Roads Department after 22 years of dedicated service. Robert loved fishing, hunting, and taking kids and grandkids on their first deer hunts. He enjoyed watching football, especially the Oklahoma Sooners, and taking his family fishing at the lake and on the Republican River. He liked raising peacocks, horses, and mules with Linda. Those left to cherish his memory include his son, Richard (Susan) Hauver of Franklin; daughters, Brenda (Arlo) Rupke of Stockton, MO; Lesley (Brad) Fries of Upland; grandchildren, Robert Lee Hauver, Ashley Hauver, Ryan Adams, Jennifer Wells, Haleigh Nelson, Becky Schmailzl, Devin Manser, Kaylan Gasseling, Kelsey Long, Wyatt Platt; five great-grandchildren; as well as a host of extended relatives and friends. He was preceded in death by his parents, Dell and Daisy Belle; his wife, Linda; daughter, Glenda Manser; brother, Lionel Hauver; and grandson, Austin Rupke. Tributes and memories can be shared with the family at www.craigfunerals.com.

The family of Robert B. Hauver created this Life Tributes page to make it easy to share your memories.

Send flowers to the Hauver family.