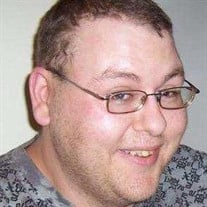 Robert A. Jenner, 36, of Kearney, passed away on Sunday, November 24, 2019 at his home in Kearney. A celebration of life open house will be held from 2:00 to 4:00 p.m. on Saturday, December 14, 2019 at the Minden Senior Center. There will be no visitation as the family has honored Robert’s wish to be cremated. Memorials in Robert’s honor are kindly suggested to the family for later designation. Craig Funeral Home is in charge of the arrangements. Robert Anthony Jenner was born on June 29, 1983 in Minden, NE to David W. and Jolene L. (Dyke) Jenner. He grew up and received his education in Kearney, where he graduated with the Kearney High School class of 2001. He continued his education at the Salt Lake City Community College. Robert worked various jobs around the community including: Mt. Carmel Home, Bob’s Super Store, Subway, and Kentucky Fried Chicken. Robert had many hobbies, some of which included playing Magic – The Gathering, reading (especially Stephen King novels), gaming, anything having to do with technical information, and spending time with his family. He will be forever remembered for his wonderful sense of humor and his contagious smile. Those left to cherish his memory include his mother, Jolene Jenner of Minden; father, Dave Jenner and wife Dawn of Kearney; sister, Sarah Brandt and husband Jacob of Kearney; maternal grandmother, Donna Dyke of Minden; step-grandmother, Marilyn Dyke of Minden; nephew, Anthony Brandt; uncles, John Dyke, and Jerry Dyke, both of Minden; as well as a host of extended relatives and friends. He was preceded in death by his paternal grandparents, Bill and Martha Jenner, and his maternal grandfather, Dennis Dyke. Tributes of memory can be shared with the family at www.craigfunerals.com.

The family of Robert A. Jenner created this Life Tributes page to make it easy to share your memories.

Robert A. Jenner, 36, of Kearney, passed away on Sunday, November...

Send flowers to the Jenner family.