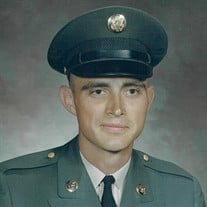 Robert J. Long, 74, of Minden, passed away on Tuesday, April 16, 2019 at Kearney County Health Services in Minden. Private family services were held at the Minden Cemetery. Memorials in Bob’s honor are kindly suggested to an American Legion Club or to a charity of the donor’s choice. Craig Funeral Home is in charge of the arrangements. Bob was born on December 31, 1944, in Sidney, Nebraska, to Jule H. and Elnor L. (Summers) Long. He attended all twelve years of school in Eddyville. While in high school, he played football, basketball and track. In the summers, he played baseball with the Oconto American Legion baseball team. After graduating from Eddyville High School in 1963, he enrolled at the University of Nebraska at Lincoln. He was in teachers college and did his student teaching in Lincoln. While attending college he spent the summers working for Harmack Fumigation with his brother-in-law, Bob Vitera. After graduation from UNL, he was drafted into the United States Army. He was assigned to Fort Huachura, AZ military base, from there to US Army Training Center Fort Lewis, WA. His last training in the U.S. for him was U.S. Army Southeastern Signal School Fort Gordon, GA for intelligence and communication training. He was assigned to the 101st Airborne Division and deployed to Vietnam in November 1968, and was honorably discharged November 15, 1969. Bob returned to Minden where he worked with his brother-in-law until his retirement. A very special only “Uncle Bob” taught Lorraine, Valerie, Rob and Dave how to drive on the Harmack property north across the street from the Minden Cemetery where he worked for nearly 40 years. Bob is survived by his sister, Karen Vitera of Minden, and her family: Lorraine Swanson and husband Toger, Rachel Swanson, Audrey Jarvis and husband Nathan, Evan and Lindsay Swanson, Valerie Wentworth and husband David, Jessica and Tiffany Wentworth; Rob Vitera and wife Laura; Lillian, Robert John (RJ) and Isaac Vitera; David Vitera and wife Debra, Brianna, Ryan Jon and Mitchell Robert Vitera. He was preceded in death by his parents and brother-in-law, Robert Vitera.

Robert J. Long, 74, of Minden, passed away on Tuesday, April 16, 2019 at Kearney County Health Services in Minden. Private family services were held at the Minden Cemetery. Memorials in Bob&#8217;s honor are kindly suggested to an American... View Obituary & Service Information

The family of Robert J. Long created this Life Tributes page to make it easy to share your memories.

Send flowers to the Long family.