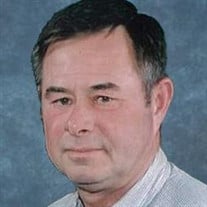 Rodney L. Jurgens, 73, of Wilcox, passed away at Christian Homes Care Community in Holdrege on Thursday, July 15, 2021. Funeral services will be held at 10:30 a.m. on Thursday, July 22, 2021 at Craig Funeral Home in Minden with the Rev. Craig Cedar officiating. The service will be live streamed to the funeral home’s Facebook page. Interment will be held following services at the Freewater Cemetery, southwest of Wilcox. Visitation will be held from 4:00 to 6:00 p.m. on Wednesday, July 21, 2021 at the Craig Funeral Home in Minden. Memorials in Rod’s honor are kindly suggested to the family for later designation. Craig Funeral Home is in charge of arrangements. Rodney was born on March 10, 1948 in Campbell to Donald and Gladys (Thurnau) Jurgens. He grew up on a farm south of Wilcox, and received his education at Wilcox Public School and attended college at Hastings Central Community College. He was confirmed at St. Peters Lutheran Church. Rod entered the Army National Guard in Smith Center, KS than transferred to the Army Reserves in Kearney and Hastings, serving for 21 years. He was united in marriage to Rita Giger on August 30, 1969 in Hildreth. At the time of his death, he resided in Wilcox with his wife, Rita and his little Daisy. Rodney worked as a Commercial Plumber and owned his own business. He was a member of the Wilcox American Legion and the Wilcox Volunteer Fire Department. Those left to cherish his memory include his wife of 51 years, Rita; daughters, Leslie (Greg) of Curtis, NE and Jennifer (Ron) of Tampa, FL; grandchildren, Michael and Caitlyn of Curits, NE and Nick and Lacy of Tampa, FL; great-grandchildren, Jaxson and Charlie of Tampa, FL; brother, Kendall Jurgens of Wilcox, as well as a host of other relatives and close friends. He was preceded in death by his parents, Donald and Gladys Jurgens; in-laws, Allen and Joan Giger, and brothers, Gary, Neil and Norman Jurgens. Tributes and memories can be shared with the family at www.craigfunerals.com.

Rodney L. Jurgens, 73, of Wilcox, passed away at Christian Homes Care Community in Holdrege on Thursday, July 15, 2021. Funeral services will be held at 10:30 a.m. on Thursday, July 22, 2021 at Craig Funeral Home in Minden with the Rev.... View Obituary & Service Information

The family of Rodney L. Jurgens created this Life Tributes page to make it easy to share your memories.

Rodney L. Jurgens, 73, of Wilcox, passed away at Christian Homes...