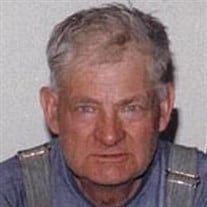 Roland Edmund Sherman, 99, of Holdrege, formerly of Axtell, passed away on Wednesday, February 6, 2019 at Christian Homes Care Community in Holdrege. Funeral services will be held at 10:30 a.m. on Thursday, February 14, 2019 at the Keene Evangelical Free Church with the Rev. Matthew Snell officiating. Interment will follow services at the Keene Cemetery. Visitation will be held from 4:00 to 6:00 p.m. on Wednesday, February 13, 2019 at the Craig Funeral Home in Minden. Memorials in Roland’s honor are kindly suggested to the Keene Evangelical Free Church. Craig Funeral Home is in charge of the arrangements. Roland was the first born child of Carl and Josie (Bergeson) Sherman. He was born on July 26, 1919 on a farm in rural Axtell, Nebraska. He attended Pleasant Valley rural school district #42 in Kearney County for his elementary grades. He later attended Kearney High School. Roland attended church and Sunday school at Keene Evangelical Free church with his family, where he was confirmed. During his later years, he attended chapel services at the nursing homes where he lived. Roland worked for various farmers and neighbors in Kearney, Buffalo County area when needed, and he also farmed with his father. During his lifetime, Roland first learned to farm with horses, and later with tractors. Roland learned how to drive in his father’s 1928 Chevy, and early equipment on the farm included a John Deere Model B, a Minneapolis Model Z, and a Baldwin self-propelled combine. The Chevy cars that Roland drove all had 6 cylinder engines with standard shift transmissions. He was more familiar with a stick shift than an automatic transmission, so that was what he wanted. After the passing of his father, Roland helped his mother, Josie with chores, driving her to town for errands and doing jobs around the house and farm. After his mother’s death in 1987, Roland continued to live alone at the family farm until 2005. A serious accident with a saw resulted in the necessity of having his leg amputated. For this reason, Roland had to move to a nursing home. He first lived in Gibbon, but when that facility closed, he moved to Haven Home in Kenesaw. His final place of residence was at Christian Homes in Holdrege. Roland enjoyed hunting, being outside, and he loved nature. He never knew a stranger, as he always liked talking to neighbors or anyone he came in contact with. He was particularly fond of talking about coyote hunting, and he continued to reminisce about his hunting days after he moved to the nursing homes. Roland lived a long life and survived his fair share of hardships. Roland will be remembered and missed by his family and friends. Those left to cherish his memory include his niece, Linda Taylor of Leawood, KS; nephews, Ronald and Kevin Jack of Eustis, NE, and Randy Lemmon of Holdrege, NE; as well as a host of grand-nieces and nephews and several great-grand nieces and nephews. He was preceded in death by his parents, brother, Carl Sherman, sisters, Eva (Sherman) Jack and Ella (Sherman) Lemmon. Tributes of memory can be shared with the family at www.craigfunerals.com.

Roland Edmund Sherman, 99, of Holdrege, formerly of Axtell, passed away on Wednesday, February 6, 2019 at Christian Homes Care Community in Holdrege. Funeral services will be held at 10:30 a.m. on Thursday, February 14, 2019 at the Keene... View Obituary & Service Information

The family of Roland E. Sherman created this Life Tributes page to make it easy to share your memories.

Send flowers to the Sherman family.