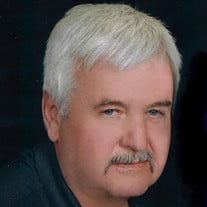 Ronald L. Lush, 65, of Wilcox, passed away on Monday, January 14, 2019 at the University of Nebraska Medical Center in Omaha following complications of hereditary Hemochromatosis. Funeral services will be held at 10:30 a.m. on Friday, January 18, 2019 at the Trinity Lutheran Church in Hildreth with the Rev. Kari Foss officiating. Private family interment will be held at the Moline Cemetery, southwest of Hildreth. Visitation will be held from 5:00 to 7:00 p.m. on Thursday, January 17, 2019 at the Craig Funeral Home in Minden. In Lieu of flowers, memorials in Ron’s honor are suggested to the family to establish the Ronald L. Lush Memorial Scholarship Fund. Craig Funeral Home is in charge of arrangements. Ron was born on September 8, 1953 in Kearney to Verlie E. and Phyllis E. (Caspers) Lush. Ron was baptized and confirmed at St. Peter’s Lutheran Church in Hildreth and attended school in Wilcox, where he graduated from Wilcox High School. On September 7, 1985, he was united in marriage to Shirley A. Harms at his parent’s farm. The family made their home in the Wilcox area where Ron enjoyed being engaged in the family farming operation with his brothers and nephew. Ron’s passion for farming began at a young age while he and his siblings helped their parents. Ron enjoyed working alongside his family for many years and teaching the younger generations the way of the land. In later years, Ron took pride in helping his parents as a caretaker. Ron was known for his sense of humor and being full of life. He loved spending time with his family and he especially enjoyed giving combine rides to his great- nieces and nephews. He also loved to operate the combine each year during harvest. He was well known in the area for his perfectly straight field rows, before GPS was even available. Ron was a member of the St. Peter’s Lutheran Church and later Trinity Lutheran Church in Hildreth, American Corn Growers Association, Wilcox FFA, Happy Farmers 4-H and Farmers Union where he was a recipient of the Silver Award. Those left to cherish his memory include his wife, Shirley Lush of Wilcox; the “kids”, Christopher (Stephanie) Holste of Oxford, Nicholas (Holly) Holste of Oxford, Kirstin (Don) Schelling of Haxtun, CO, and Kylee (Jeremy) Eckhardt of Minden; grandchildren, Braden and Lily Holste, Sarah, Natalee and Blake Holste, Marissa, Ciera, and Kaiden Schelling, and Bailey, Brett, Kennedy and Tatum Eckhardt; brothers, Gale (Laurie) Lush of Wilcox, and John (Roxanne) Lush of Holdrege; sisters, Linda (Wayne) Brummer of Wilcox, Rhonda (Greg) Roberts of Funk, Ramona (Mark) Wilder of Kearney, Trish (Galen) Kronhofman of Alma, and Shirley Loschen and fiancé Bruce Steinkruger of Upland; aunt, Karen Van Horne of Omaha; mother-in-law, Louise Harms of Holdrege; brothers-in-law, Bill (Jeannie) Harms of Tucson, AZ, Brent (Debbie) Harms of Wilcox, and Roger Stratman of Wilcox; sister-in-law, Jeanne (Butch) Ortgiesen of Kearney; as well as host of nieces, nephews, other relatives and friends. He was preceded in death by his parents; father-in-law, Bill Harms and sister-in-law, Joan Stratman. Tributes of memory can be shared with the family at www.craigfunerals.com.

Ronald L. Lush, 65, of Wilcox, passed away on Monday, January 14, 2019 at the University of Nebraska Medical Center in Omaha following complications of hereditary Hemochromatosis. Funeral services will be held at 10:30 a.m. on Friday, January... View Obituary & Service Information

The family of Ronald L. Lush created this Life Tributes page to make it easy to share your memories.

Send flowers to the Lush family.