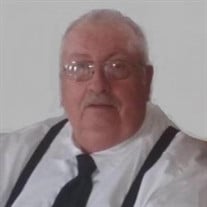 Ronald Randolph Soker, 74, of Hildreth, passed away on Monday, July 6, 2020 at his home. Memorial services will be held on Friday, July 10, 2020 at 2:00 p.m. at the Trinity Lutheran Church in Hildreth with the Rev. Michelle Carlson officiating. Inurnment will be held following services at the Hildreth Cemetery. There will be no visitation as the family has honored Ron’s wish for cremation. Memorials in Ron’s honor are kindly suggested to the family for later designation. Craig Funeral Home is in charge of arrangements. Ronald was born on April 22, 1946 in Lincoln and soon after, was adopted by George and Ilow (Cole) Soker of Hildreth. He grew up in the Hildreth area and attended Hildreth Public Schools. He married Betty Russell and to this union a son and a daughter were born: James and Ronda. Ron entered the United States Army National Guard where he faithfully served from 1966 to 1972. He was united in marriage to Lana (Stoner-Cloyd) on August 9, 1992 in Las Vegas, NV. With this union, Ron was blessed to gain her son, Adam. Ron owned his own trenching business, wash and wax business, worked for a farmer for fifteen years, and worked spinning metal until he retired. He loved camping, fishing, restoring Maytag motors and John Deere garden tractors. Those left to cherish his memory include: his wife, Lana; children, James Lee Soker and his wife, Tabatha, Ronda June (Soker) Jaeschke and her husband, Don, and Adam Lee Cloyd and his special friend, Veronica Mayoleth; grandchildren, Jerry Soker, Zach Soker, Rhyen Soker, Chrystal Soker, Jacob Jaeschke, Jennifer Jaeschke, Jacelynn Cloyd, Jayda Hurley and Adrienne Cloyd; one great-grandson; as well as numerous extended relatives and friends. Ron was preceded in death by his parents. Tributes and memories can be shared with the family at www.craigfunerals.com.

Ronald Randolph Soker, 74, of Hildreth, passed away on Monday, July 6, 2020 at his home. Memorial services will be held on Friday, July 10, 2020 at 2:00 p.m. at the Trinity Lutheran Church in Hildreth with the Rev. Michelle Carlson officiating.... View Obituary & Service Information

The family of Ronald R. Soker created this Life Tributes page to make it easy to share your memories.

Ronald Randolph Soker, 74, of Hildreth, passed away on Monday,...

Send flowers to the Soker family.