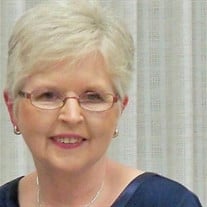 Rosalie “Rose” Carla Space-Bell, 65, of Hillsboro, OR, passed away on July 21, 2019 at her home surrounded by family and friends. Memorial services will be held at 2:00 p.m. on Tuesday, November 26, 2019 at the Minden United Methodist Church with the Rev. Peter Choi officiating. There will be no visitation as the family has honored Rose’s wish to be cremated. Memorials are suggested to the family for later designation. Craig Funeral Home is assisting the family. Rose was born on August 26, 1953 in Minden, NE. She was youngest of two children born to Dale and Vivian (Rundquist) Space. She was raised on the family farm in Minden and attended Minden High School, graduating with the Class of 1971. She later attended business college in Grand Island, NE. She had lived in and around Nebraska until 1992. She met her husband, Robert Charles Bell II, through mutual friends. They soon became companions leaving Minden and moving to Hillsboro, OR. They married on December 28, 1996. Rose had worked in Scottsbluff, Grand Island and Minden, before moving to Oregon. In 1999 Rose and her husband started their own carpet restoration company, Bell Carpet and Upholstery Cleaning. Rose was the co-owner and ran the office side while Robert ran the job-sites. She enjoyed reading, dancing, cooking, quilting and spending time with her family. Rose liked to take long road trips while visiting Nebraska. She was a very private person. She is preceded in death by her mother, Vivian. She is survived by her loving husband, Robert, a daughter; Kristine Rock of Hillsboro; her father, Dale of Minden; a sister and brother in law, Beverley and Mitchell Logan of Gadsden, AL; two grandchildren, Kai and Taylor; a niece, Amanda, and nephew, Steve. Tributes of memory can be shared with the family at www.craigfunerals.com.

The family of Rosalie "Rose" C. Space-Bell created this Life Tributes page to make it easy to share your memories.

Send flowers to the Space-Bell family.