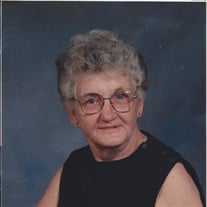 Rosetta Best, 83 years of age from Franklin, NE, formerly of Minden died on Friday, September 9, 2016 at the Franklin Nursing Center in Franklin, Nebraska. Rosetta was born on September 22, 1932 on a farm southwest of Upland, NE to Fred and Agnes (Petersen) Best. She was the fifth child of eight and was better known as “Jean” to her family and close friends. Rosetta attended rural Dist. 45 and began high school in Upland, Franklin County. The family moved from the farm to Minden in 1948. Rosetta graduated from Adult High School in Lincoln as the Salutatorian. She worked in production, as a nurse’s aid and in food service. She retired from the Kearney County Health Services as a cook. She reclaimed her maiden name, as a divorcee after her children were grown. Rosetta served on the Community Action Board of Lincoln for three years, one year as vice chairman; three years on the advisory Committee to Nebraska Alliance for the Mentally Ill (NAMI) Region three; and three years on the Mid Nebraska Community Action Advisory Committee of Kearney County. She reinstated the Heartland SHARE food program in Kearney County and was co-coordinator until restricted by poor health. Rosetta was sensitive to the underprivileged and visited residents of orphanages and nursing home in various areas of the county. She had many hobbies and interests. Her favorites being woods crafts, sewing and gardening. Rosetta was a vivacious person who loved life, respected God’s will, was grateful for Jesus and his teachings, and believed the Spirit to be the center of individual personalities and good works. Survivors include three daughters, Rita Toovey and husband, Bruce of Waco, NE, Roni Snyder of Minden and Rojina Snyder of Shelton; son Edwin Snyder of Lincoln; 4 grandchildren; 7 great grandchildren; two sisters, Lois Leach and Clarice Lawson both of Lincoln. She is preceded in death by an infant son, E.J., son, Eugene (Jerry), two brothers and three sisters. Memorials are suggested to the family. There will be no services, but please feel free to write a tribute to Rosetta on this website. Thank-you

Rosetta Best, 83 years of age from Franklin, NE, formerly of Minden died on Friday, September 9, 2016 at the Franklin Nursing Center in Franklin, Nebraska. Rosetta was born on September 22, 1932 on a farm southwest of Upland, NE to Fred and... View Obituary & Service Information

The family of Rosetta Best created this Life Tributes page to make it easy to share your memories.

Rosetta Best, 83 years of age from Franklin, NE, formerly of...

Send flowers to the Best family.