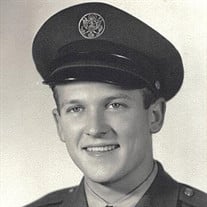 Ross Eugene Wright, 87, of Minden, passed away on Thursday, January 10, 2019 at Bethany Home in Minden. Funeral services will be held at 11:00 a.m. on Tuesday, January 15, 2019 at the Minden United Methodist Church with the Rev. Peter Choi officiating. Private family interment will be held prior to services at the Minden Cemetery. Visitation will be held from 2:00 to 4:00 p.m. on Monday, January 14, 2019 at Craig Funeral Home in Minden. Memorials in Ross’ honor are kindly suggested to the Minden United Methodist Church. Craig Funeral Home is in charge of the arrangements. Ross was born on April 15, 1931 to Merlin and Lucille (Ross) Wright in Minden. He grew up north of Minden where he attended grade school at Harmony District #40 and graduated from Minden High School in 1948. He attended Kearney State College in 1949, before entering the United States Air Force. He faithfully served his country from 1950 to 1954, during the Korean War. Ross was in charge of radar for B-29’s, and was stationed in the Philippians for three years. Ross was united in marriage to Carol J. Nelson on December 19, 1954 in Minden, and to this union three sons were born: Gregory, Perry, and Michael. The family made their home in Holdrege, Columbus, and Grand Island, before returning to Minden in 1981. Ross worked as an electrician and electrical salesman for most of his life, but also served as a Kearney County Commissioner for twelve years. Ross also assisted with the restoration of the Gatling Gun at the court house. Ross was very skilled in wood working, where he made cork/wood trivets, numerous farm toys, most of which he gave away to people. He donated some of his creations to the Kearney County Hospital Foundation. He also made a replica of the Kearney County Court House that is now on display at Pioneer Village. Ross was a member of the Minden United Methodist Church, American Legion, V.F.W., and Nebraska County Supervisors Assoc. He enjoyed camping, fishing, golfing, and playing cards. Those left to cherish his memory include his wife, Carol of 64 years; sons, Gregory of Grand Island, Perry and wife Sonya, of Atlanta, Georgia, and Michael of Parker, Colorado; four grandsons, one granddaughter; six great-grandchildren; as well as a host of other relatives and friends. He was preceded in death by his parents; brother, Donald and half brother, Robert Wright. Tributes of memory can be shared with the family at www.craigfunerals.com.

Ross Eugene Wright, 87, of Minden, passed away on Thursday, January 10, 2019 at Bethany Home in Minden. Funeral services will be held at 11:00 a.m. on Tuesday, January 15, 2019 at the Minden United Methodist Church with the Rev. Peter Choi... View Obituary & Service Information

The family of Ross E. Wright created this Life Tributes page to make it easy to share your memories.

Ross Eugene Wright, 87, of Minden, passed away on Thursday, January...

Send flowers to the Wright family.