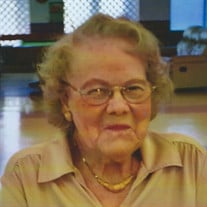 Rowena Olivia Chase March 5, 1922 – November 5, 2016 Rowena Olivia Chase age 94, of Minden died on Saturday, November 5, 2016 at Bethany Home in Minden. Funeral services will be on Thursday, November 10, 2016 at 10:30 a.m. at the Evangelical Free Church in Minden. Burial will be at the Bainbridge Cemetery near Huntley, Nebraska. Visitation will be at the Layton-Craig Funeral Home on Wednesday from 3:30 p.m. until 5:30 p.m. Rowena was a member of the Evangelical Free Church in Minden. She was born on a farm Northeast of Huntley, Nebraska to Charlie (Charles) and Kezia (Moore) Zimmerman on March 5, 1922. Her father passed away when she was four and a half years old. Her family moved to Huntley, where her mother owned and operated The Cozy Inn Café. Rowena had fond memories of her brother, Bill (William). They used to sit on the front porch and sing songs with Bill playing guitar. He was a wonderful brother who helped support his family, after their father died. In 1935 he passed away at 21 years of age. Her sister Euella would come to Rowena’s aide if she was bullied by others, as older sisters feel they should. Her mother had to sell the café to care for a family member in Beatrice. She attended schools in Beatrice and Republican City. Her mother answered an ad in the Holdrege Daily Citizen, by Arthur Hendricks, a bachelor farmer who lived North of Holdrege. She remembered the day Art came to Republican City to get her mother and her, driving up the lilac lined driveway to a big farm house. She had never seen such a mansion. Her mother and Art fell in love and married 6 months later. A short time later, Art adopted Rowena. She was so proud of him and loved him like the father she lost. She attended school in Funk until her parents sold the farm and moved to Loomis. She went her freshman and sophomore years at Holdrege High School. She graduated in 1943 from the Nebraska School of Agriculture in Curtis, NE. She had a room mate, Doris (June) Chase, while living at the Girl’s Dormitory. Doris introduced her to her brother, Don who was a Marine on furlough during WWII. They dated for two weeks, corresponded through the mail when he returned to Camp Pendleton. They were married on July 20, 1944, in Phillipsburg, KS. They lived in Oceanside, California for two months before Don was shipped to Japan, serving in the Battle of Imo Jima. After his discharge, they moved to Correctionville, Iowa. Their first child, Larry was born in 1946. Later they bought a farm between Oxford and Bertrand. Their three daughters were born in Lexington. Donna was born in 1948, Carol in 1950 and Bonnie in 1952. They sold the farm and moved to Fort Morgan Colorado where their youngest child, John was born in 1955. They purchased a café, grocery store and gas station in Weldona Colorado in 1958. “Chases Place” was a family business with the children helping out. Larry and Donna graduated from Weldon Valley School. In June 1967, Don took a job position at Minden Beef Plant and the family moved to Minden. They purchased the Hy-Way Café and continued business until Rowena’s health failed. Carol, Bonnie and John graduated from Minden High School. Don and Rowena opened their first antique shop – Treasure Chest Antiques. They relocated four times ending up purchasing the old First National Bank building. Don passed away in 1984 and Rowena sold the building and inventory in 1988. Later she opened an antique shop in the old Opera House building. In 1996 she underwent triple by-pass surgery and had a stroke two days later. She moved back to her home after several months of rehabilitation Rowena sold her house and moved to Superior to be close to her daughter, Donna. She lived at Wilde Ridge Estates for five years and moved to Bethany Home Assisted Living in 2003. She had two companions living with her, Mollie, her Yorkshire Terrier and Bootsie her cat. She enjoyed taking care of her pets, baking, writing poetry, journaling, writing letters, gardening and going to the many activities. She lived there for eight and a half years and moved to the Healthcare Facility, living there five and a half years. Survivors include two sons, Larry Chase of Kearney and John Chase of Omaha: three daughters and their spouses, Donna (Dave) Lovewell of Superior, Carol Dolan of Kearney, Bonnie (Keith) Soderquist of Sioux Falls, South Dakota; 9 grandchildren, 12 great-grandchildren and 2 great-great-grandchildren. She was preceded in death by her husband, Donald; son in-law, Larry Dolan, brother, William and sister Euella (McDonald) Fischbach

The family of Rowena Olivia Chase created this Life Tributes page to make it easy to share your memories.

Send flowers to the Chase family.