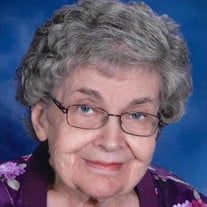 Ruth Eileen Bridges, 91, of Norman, passed away on Saturday, April 21, 2018 at the Good Samaritan Society – Hastings Village. Funeral services will be held at 2:00 p.m. on Friday, April 27, 2018 at the Minden United Methodist Church with the Rev. Tom Barnes officiating. Interment will be held following services at the Kenesaw Cemetery with the Rev. John Whitsett officiating. Visitation will be held from 4:00 to 6:00 p.m. on Thursday, April 26, 2018 at the Craig Funeral Home in Minden. Ruth was born on March 28, 1927 in rural Mount Pleasant, IA to Lt. Col. Perry C. and Luella M. (Nickolaus) Mathews. She grew up in the Mount Pleasant area and attended Pleasant Lawn School where she graduated with the class of 1944. She later attended Iowa State University in Ames, IA and received her Bachelor’s of Science degree in Foods and Nutrition with an emphasis in Experimental Cooking. On February 25, 1951, she married Marvin L. Bridges in Kearney, NE and to this union, four children were born: Eileen, Leslie, Rosalie and Daniel. She worked for Consumers Public Power as a home economist, before becoming a homemaker and helping on the family farm. Ruth had a real passion for baking and was affectionately referred to as “The Cake Lady”. She made numerous wedding cakes and baked goods for special events. She also enjoyed gardening, collecting cook books and most importantly, spending time with her family. Ruth was a member of the Minden United Methodist Church where she served as Sunday School Teacher and Superintendent as well as served with the United Methodist Women’s group. She belonged to the Iowa State Kappa Phi Sorority and also served on the Norman School board for many years. Those left to cherish her memory include her daughter, Eileen Noll of Hastings, NE; sons, Leslie Bridges of Kansas City, MO and Dan Bridges and wife Rachel of Minden, NE; grandchildren, Dr. Bryce Noll and wife Tina of Sioux City, IA, Dr. Benjamin Noll and wife Nicole of Bennington, NE, Owen Bridges and Nickolaus Bridges, both of Minden, NE; great-grandson, Carter Noll; sisters, Shirley Madden of Olds, IA and Charlotte McClure of Kansas City, MO; sisters-in-law, Nevabelle Howe of Kearney and E. Ruth Bridges of McCook, NE, as well as a host of nieces, nephews, other relatives and friends. She was preceded in death by her parents, her husband Marvin in 1987; sisters, Margaret Leu and Phyllis Mallams and one daughter, Rosalie Bridges during infancy. Memorials are suggested to the Minden United Methodist Church for children’s Bibles. Tributes of memory can be shared with the family at: craigfunerals.com Craig Funeral Home is in charge of the arrangements.

The family of Ruth E. Bridges created this Life Tributes page to make it easy to share your memories.

Ruth Eileen Bridges, 91, of Norman, passed away on Saturday,...

Send flowers to the Bridges family.