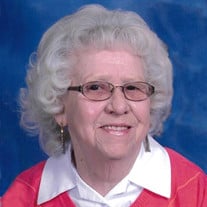 Sally Joan Pittner, 78, of Minden, passed away on Tuesday, August 20, 2019 at CHI Health – Good Samaritan in Kearney. Funeral Mass will be held at 10:30 a.m. on Friday, August 23, 2019 at St. John’s Catholic Church in Minden with Rev. Julius Tvrdy officiating. Interment will be held following services at the Minden Cemetery. Visitation will be held from 3:00 to 5:00 p.m. on Thursday, August 22, 2019 at Craig Funeral Home in Minden with Rosary service at 7:00 p.m. at St. John’s Catholic Church. Memorials in Sally’s honor are kindly suggested to the family for later designation. Craig Funeral Home is in charge of the arrangements. Sally was born on November 16, 1940, in Minden, to George and Erma (White) Miller. She graduated from Minden High School in May of 1958 and did the books for her father's company, Miller the Driller, until June 11, 1960, when she was united in marriage to William F. Pittner of Herford, Texas. After a short time living in Texas, the couple chose to move back to Minden where they would raise their family. Sally went to work again with her father until 1973 when the couple purchased a business. For many years they ran their bar and grill “Willies”. Although the sign had her husband’s name, Sally was really in charge. The couple celebrated 59 years of marriage. Sally was a member of Saint John's Catholic Church of Minden where she was part of the Altar Society and for many years she served as song leader. Once retired, Sally occupied her time by keeping track of Willie, baking, and crocheting. She also loved her Double Diamond Deluxe slot machine and enjoyed trips to the casino with family and friends. She was a very good listener and always assured her children “things would work out in the wash”. She will be forever missed. Those left to cherish her memory include her husband, William Pittner of Minden; children, Michael (Rachel) Pittner of Minden, Danny (Jennifer) Pittner of Minden, and Lisa (Mike) Vedder of Lincoln; grandchildren, Kyran (Rachel) Pittner of Omaha, Jaedyn Pittner of Minden, Ely Pittner of Minden, Taylor (Jake) Dunn of Blair, Bailey Pittner of Kearney, Hunter Vedder of Lincoln, Hayden Vedder of Lincoln; one anxiously awaited great-grandchild; sisters, Susan Lempka, Frances Buescher, Rebecca Miller, Anne Dorn, Laura Martinez; brother, Jon Miller; as well as a host of nieces, nephews, other relatives and friends. Sally was preceded in death by her parents; children, Ricky, Sonya and Greg, and brothers, Ted, Jim, and Randy Miller. Tributes of memory can be shared with the family at www.craigfunerals.com.

The family of Sally J. Pittner created this Life Tributes page to make it easy to share your memories.

Sally Joan Pittner, 78, of Minden, passed away on Tuesday, August...

Send flowers to the Pittner family.