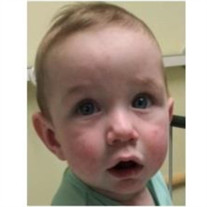 On Sunday, February 28th, 2021, Samuel Knox Nelson went into the arms of Jesus, after a roller coaster battle with his complex congenital heart defect, 17 days before his first birthday. Samuel joined our family on Tuesday, March 17, 2020 at Bergan Mercy Hospital in Omaha, Nebraska. Having a known heart defect, Samuel's battle began immediately. He was transported to Children's Hospital in Omaha where he received his first heart surgery at one week old. After 6 weeks of growing stronger, he was ready to meet his brothers, Sebastian, Max, and Sawyer. They were delighted to finally hold him. The joy lasted a week before Samuel needed more support and headed back to Children's. Three long weeks later, we finally got to be together as a family. From the moment they met him, Samuel was adored by his brothers. They spent day after day taking turns holding him and helping mom and dad care for him. They wanted to be a part of his care whether it be getting him dressed, giving medications, or preparing his feeding tube, but never changing a diaper. Samuel enjoyed watching his brothers' every move. He always had an eye on them as they played together and with him. He especially loved when they would all snuggle together on the bed or a blanket in the grass. We learned quickly that Samuel did not enjoy the heat of the summer but enjoyed evening walks and being outdoors when it was cooler. His favorite place was on his parent's soft comforter, with a blanket snuggled to the side of his face. While out of the hospital, Samuel was seeing a specialist each week. There were many times they were concerned that Samuel was struggling but he showed them over and over that he wanted to stay home. Each week was an opportunity for Samuel to steal the hearts of all who took care of him. He dazzled them with his gummy smile and bright blue eyes. We joked that he loved all his nurses and doctors as long as they talked to him from a distance. Once they attempted to examine him, he would be sure to let them know they were no longer friends but then back to the biggest smile the moment they stepped back. Samuel spent the fall sitting with his brothers as they did school and playing outside. He enjoyed throwing the ball for the dog and moving around in his walker. He chewed on everything, except food. While traveling was not easy, we still took several trips to celebrate graduation, a baby shower, birthdays, spending time with Grandpa, Grandma, and brothers as they taught him how to fish and walking to the river while camping with Nana, Papa, aunts, uncles, and cousins. Samuel went on many walks, hikes, and through tree top adventures strapped to his father's chest; excited to be able to tag along with his brothers. Many of the holidays this year were spent at the hospital but we got to enjoy Father's Day, Fourth of July, Halloween, and Thanksgiving at home together as a family. For Halloween Samuel was a wolf and Thanksgiving brought a turkey hat, both of which Samuel very much disliked. In October, Samuel also received his G-tube which took the tape off of his face and accentuated his large eyes and smile. Being able to see his face was one of Mommy's favorite parts of the year. On December 17, 2020 Samuel went in for his 2nd heart surgery. The surgery went well but he still had some work to do. While in the hospital, Samuel was growing and learning. He learned to clap, then crawl. When he wasn't throwing a toy and chasing it all over his play mat, he was using his feet to stomp out a tune on his piano or flipping the pages in his books. He even had a favorite yoga pose: Downward Dog. As always he was making friends and practicing his new skill of waving, whether it was during our walks around the 5th floor, a checkup, or someone just stopping by for a visit. Oftentimes, he even joined the conversation with his head nodding and a resounding "yea, yea". He even made friends with the babies in the rooms around him. They would "talk" by yelling at each other. He also enjoyed "talking" with mommy using his pterodactyl noises. As we grew weary of being in the hospital, the doctors grew concerned that nothing they were doing was working to heal his body. After 7 weeks of little progress, it was decided that he needed a 3rd heart surgery. Three weeks later Samuel's body succumbed to side effects due to medications. He passed in the arms of his parents, surrounded by his brothers, Nana and Papa, cousin, and many Children's staff. Samuel was preceded in death by his sister Brynn Lee Nelson; great-uncles, Larry Kelly, Dan Nelson, Jim Carlson, and Phil Pedersen; great-aunts, Marylin Kelly (Bill), Carol Bilka, Marilyn Kelly (Jerry). He is survived by his parents, Zach and Wendi; brothers, Sebastian, Simon, and Sawyer; grandparents, Kendall and Pat Nelson of Holdrege, Greg and JoAnn Sadler of Callaway; aunts and uncles, Jennifer Nielsen (Randy) of Broken Bow, Hiedi Carlson (Chris) of Central City, Josh Nelson of Hastings, Beth Pouk (Denny) of Loomis, and Andrew Nelson (Cassie) of Omaha; numerous adoring cousins and counting; extended family and friends that have shown so much love to our us. In lieu of flowers, please direct memorials to the family to be used in Samuel's memory at a later time. Services will be held at 10:00 a.m. on Monday, March 8, 2021 at the First Baptist Church in Omaha (421 Park Avenue) with committal services being held at 2:00 p.m. on Tuesday, March 9, 2021 at the Upland Cemetery. Craig Funeral Home in Minden and Braman Mortuary in Omaha are assisting the family.

On Sunday, February 28th, 2021, Samuel Knox Nelson went into the arms of Jesus, after a roller coaster battle with his complex congenital heart defect, 17 days before his first birthday. Samuel joined our family on Tuesday, March 17, 2020 at... View Obituary & Service Information

The family of Samuel Knox Nelson created this Life Tributes page to make it easy to share your memories.