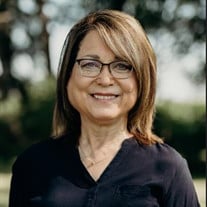 Sandra J. Wendell, 62, of Axtell, passed away on Monday, February 3, 2020 at Hearthstone in York, NE. Celebration of life services will be held at 11:00 a.m. on Friday, February 7, 2020 at Bethany Lutheran Church in Minden with the Rev. Donald Hunzeker and Rev. Gale Dorn officiating. Private family interment will be held prior to services at the Minden Cemetery. Visitation will be held from 5:00 to 7:00 p.m. on Thursday, February 6, 2020 at Trinity Lutheran Church in Axtell. In lieu of flowers, memorials are suggested to Be The Match, M.O.N.A., or to the Axtell Community Fund. Craig Funeral Home is in charge of arrangements. Sandra June Reinke was born June 9, 1957 in Deshler, Nebraska to Richard and Edna (Pohlmann) Reinke of Hebron, Nebraska and was baptized on June 23, 1957 at Grace Lutheran Church in Hebron. In 1960, she moved with her family to rural Deshler attending both public and parochial school. She affirmed her baptism on April 4, 1971 at Peace Lutheran Church in Deshler. She graduated from Deshler High School in 1975. Following graduation she attended Omaha Art School and Kearney State College where she completed a B.A. in Art Education. Following her marriage to Doug Ehlers in 1977, she was blessed with a son, Derek Austin in 1981 and daughter Jordan Danielle in 1991. They called Minden, Nebraska home with the exception of two years spent in Evansville, Indiana. The majority of Sandi’s teaching experience was in Minden teaching elementary and secondary art. While teaching, she was active in ESU 11 Art Teachers and the Nebraska Art Teachers Association. In 1989, she received her M.A. in Art Education from the University of Nebraska at Kearney. In 2000, Sandi married Steve Wendell becoming stepmother to Josh, Dani, Sami and Kassie Wendell. They lived in Minden a short time before moving to rural Axtell where Steve and Sandi have made their home. Following a second B.A. in Visual Communication and Graphic Design, Sandi worked as a graphic designer in Kearney and taught part time at UNK. In 2007, she joined her family business located in Deshler by managing Reinke Land Co. and serving on the Board of Directors at Reinke Manufacturing Co. Inc. Sandi served on the Nebraska Community Foundation Board, Nebraska 4-H Foundation Board, Minden Opera House Board and Trinity Lutheran Church Council. She was a founding member of the Axtell Community Fund and served on its Advisory Council. She is survived by husband, Steve Wendell, of rural Axtell; children, Derek Ehlers and wife Julie of Lincoln, Nebraska and Jordan Ehlers of Hastings, Nebraska; stepchildren, Kassie Wendell, Josh Wendell and wife Jessi all of Omaha, Nebraska, Dani Wendell and partner Megan Roan of Federal Way, Washington, Sami Foster and her husband Dan of New York, New York; grandchildren, Violet and Myles Ehlers, Lincoln; and step-grandchildren, Eva and Oliver Wendell, Omaha; mother, Edna A. Reinke of Deshler; mother-in-law, Marjorie Wendell of Kearney; siblings, Jennifer Reinke of Hebron, Russ Reinke and wife Sharon of Deshler, Nebraska, Robert Reinke and wife Becky and Pat Schardt all of Deshler; brothers-in-law, Lowell Wendell of Palm Springs, CA, Don Wendell and wife Pam of Littleton, CO, Alan Wendell and wife Dee of Ft. Washington, PA, Jason Ehlers and wife Collette of Lincoln, NE; sisters-in-law, Jennie Rodriquez and husband Ernie of Gothenburg and Deb Kaenel of Minden. Preceding her in death are her father Richard F. Reinke, Fathers-in-law Robert Wendell and Don Ehlers, Mother-in-law Emma Jean Ehlers and brother-in-law Steve Ehlers. Tributes and memories can be shared with the family at www.craigfunerals.com.

Sandra J. Wendell, 62, of Axtell, passed away on Monday, February 3, 2020 at Hearthstone in York, NE. Celebration of life services will be held at 11:00 a.m. on Friday, February 7, 2020 at Bethany Lutheran Church in Minden with the Rev.... View Obituary & Service Information

The family of Sandra J. Wendell created this Life Tributes page to make it easy to share your memories.

Sandra J. Wendell, 62, of Axtell, passed away on Monday, February...