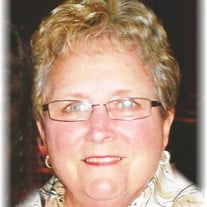 Sandra “Sandy” L. LaBrie, 72 years of age from Minden, NE died on Tuesday, July 12, 2016 at CHI Good Samaritan Health in Kearney. Funeral services will be on Saturday, July 16, 2016 at 10:30 a.m. at the St. John’s Catholic Church in Minden with Father James Benton officiating. Visitation will be at the Layton-Craig Funeral Home in Minden on Friday from 3-5 p.m. Rosary will be recited at the church on Friday evening at 7 p.m. Burial will be in the Minden Cemetery. Memorials are suggested to the family. Sandy was born on December 15, 1943 in Hastings, NE to William and Phyllis (Shay) Witt. She grew up in the Hastings-Kenesaw area and graduated from Kenesaw High School. On April 3, 1965 she married David LaBrie at St. Cecelia Catholic Church in Hastings. They lived in Aurora and then moved to Minden in 1977. Sandy worked at several retail stores in the Minden and Kearney area including Dollar General. She loved visiting with all of her customers at Dollar General. Sandy was a member of the St. John’s Catholic Church in Minden, the Alter Society, and she was also a member of the Red Hat Society. She had a love and passion for animals and will dearly miss her beloved dog and cat she left behind. But most of all, she loved her family. She was always present for her grandkids events and would do anything for them. She loved life and most recently she found enjoyment camping at the lake on the weekends. She made many friends over the years but always kept her family at the top of the list. Sandy was a cancer survivor; she beat cancer, not only once, but twice. Survivors include her husband, David of Minden; two daughters, Kim Favinger of Kearney and Jennifer Madsen and husband, James of Minden; four grandchildren, Meghan Bunger of Omaha, Jacob Bunger of Lincoln, Josie Madsen of Minden and Janessa “Pete” Madsen of Minden; mother, Phyllis Witt of Kenesaw; one sister, Sherry Deterding and husband, Mike of Gretna, two brothers, James Witt of Houston and Robert Witt, and a host of nieces, nephews, other relatives, and friends. She is preceded in death by her father and special grandmother, Annie Hilty.

The family of Sandy LaBrie created this Life Tributes page to make it easy to share your memories.

Send flowers to the LaBrie family.