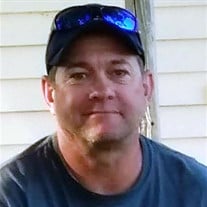 Scott Douglas Horine, 51, of Upland, NE, died Thursday, January 7, 2021, at his home, after succumbing to a long and difficult battle with grief and depression. A celebration of life open house in remembrance of Scott will be held on Saturday, January 16, 2021, from 2:00 to 4:00 p.m. at The Windmill, 521 North Colorado Avenue, Minden, NE. Memorials are suggested to the family. Craig Funeral Home in Minden is assisting the family. He was born October, 22, 1969, in Minden, NE, to Joan (Knoll) and LeRoy “Pete” Horine. He lived much of his early childhood in Denver, CO, and several locations in Arkansas. His family moved back to Nebraska when Scott was in his early teens, where they settled in Broken Bow. Scott graduated from Broken Bow High School in 1987. Scott married Dani Gates in 1991 and they remained in Broken Bow. Scott and Dani were married for twelve years and had three children, Wyatt, Morgan and Evan. Scott married again in 2013 to Wendy Koons. Wanting to live closer to extended family in the Minden area, he and Wendy moved to their current residence just north of Upland. Although Scott and Wendy divorced in 2019, they remained close and continued to share the same residence. They had no children together, but shared their love for the many furred and feathered creatures they adopted. Scott was employed in a variety of jobs over the years. In his work, he was known for his strong mechanical abilities and problem solving skills. He was a certified, factory trained mechanic for Briggs and Stratton, Tecumseh and Kohler, and held various positions in the auto salvage industry with Farritor’s in Broken Bow, ABC Salvage in North Platte, and H&H in Cozad. He worked on a highway construction crew with the Nebraska Department of Transportation. For a time, he owned his own home remodeling and construction business. The jobs he seemed to be the most proud of were operating a 50 ton Gantry Crane, for CXT in Grand Island, and his position as Assembly Supervisor for Patriot Equipment in Minden. His latest endeavor was a growing eBay business. Most of his life, he spent his leisure time outdoors enjoying hunting, fishing, trapping and metal-detecting. He was never without a detailed story recounting an outdoor adventure. He will be remembered for his ability to fix just about anything that needed to be repaired, and for his passionate opinions, especially regarding his beloved United States and its history. Scott tried his best throughout his life to present a stoic and independent front, but to those closest to him he revealed a different side. His own unresolved pain and grief made him feel he never measured up to expectations and that he brought pain and disappointment to everyone he loved. All those who knew him well, and who had the privilege of spending time with him during his good years, know he was an intelligent, talented, caring man with a big heart who loved to laugh. If only he could have seen himself though the eyes of those who loved him, he would still be with us. He is survived by his son, Wyatt Horine of Greeley, CO; daughter, Morgan Horine of Omaha, NE; half-sister, Mickey Krieth of Gardnerville, NV; half-brother, Mike Hostetler of North Little Rock, AR; former wives, Dani Gates of Broken Bow, NE, and Wendy Koons of Upland, NE; uncle, Randy Horine of Minden, NE; and a number of nieces, nephews and cousins in the Minden area and elsewhere. He was preceded in death by his parents, Joan and Pete Horine; son, Evan Horine; sister, Vicky Horine; and half-sister, Marsha Horine. Tributes and memories can be shared with the family at www.craigfunerals.com.

Scott Douglas Horine, 51, of Upland, NE, died Thursday, January 7, 2021, at his home, after succumbing to a long and difficult battle with grief and depression. A celebration of life open house in remembrance of Scott will be held on Saturday,... View Obituary & Service Information

The family of Scott D. Horine created this Life Tributes page to make it easy to share your memories.

Send flowers to the Horine family.