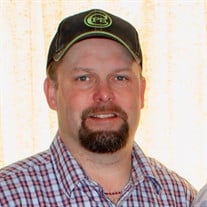 Seth “Zeke” Ryan Johnson, 39, of rural Upland, passed away on Tuesday, April 16, 2019 at his home. Funeral services will be held at 10:30 a.m. on Saturday, April 20, 2019 at Trinity Lutheran Church in Hildreth with the Rev. Kari Foss officiating. Interment will be held following services at the Emmanuel Lutheran Cemetery near Hildreth. Visitation will be held from 5:00 to 7:00 p.m. on Friday, April 19, 2019 at the Craig Funeral Home – Jelden Chapel in Hildreth. In lieu of flowers, memorials in Seth’s honor are kindly suggested to the family for later designation. Craig Funeral Home is in charge of the arrangements. Seth Ryan Johnson was born on March 29, 1980 in Minden, Nebraska, to Stephen F. and Melanie B. (Blume) Johnson. He was baptized on May 5, 1980 and confirmed on April 9, 1995 at Emmanuel Lutheran Church in Hildreth. He grew up in the Upland area and graduated from Minden High School with the class of 1999. He then attended Central Community College in Beatrice where he achieved a degree in agriculture. On September 24, 2005, he was united in marriage to Mary R. Stuehm in Hildreth and to this union, four children were born, Kaleb, Kip, Kolt and Parker. The family made their home in rural Upland where Seth was a dedicated husband, father, and farmer. Seth was an active athlete in high school and attended Boys State. He enjoyed spending time with family, especially his children. He was a loving and dedicated father and took great pride in instilling his wisdom in his children. Seth enjoyed collecting farm toys and could find a solution to any problem with his building and creative skills. He enjoyed attending his children’s activities and recently helped coach optimist football. Seth loved farming from an early age and he never lost that passion. He was a good cook and enjoyed gardening and canning. He enjoyed making his famous mushroom dish for family and church gatherings. He was known for his love of spicy food and thought everyone else should like it that way, too. No matter where Seth went, he always had his pliers with him, even at his wedding! He was always willing to lend a helping hand to anyone in need and would drop what he was doing when needed. Seth was a member of Trinity Lutheran Church in Hildreth, where he was currently serving on the church council. He was also a member of the Sons of the American Legion in Upland. Those left to cherish his memory include his wife, Mary Johnson; children, Kaleb, Kip, Kolt, and Parker Johnson; parents, Stephen and Melanie Johnson; father and mother-in-law, David and Lydia Stuehm; brothers, Shane Johnson and fiancée Tammy Svadlenka and Brent and wife KatieAnn Johnson; sisters and brothers-in-law, Laurel and Joey Thorell, Chris Stuehm and fiancée Daniell McKain, and Robert Stuehm; aunts and uncles, Suzanne and Steven Fries, Sandy and Jerry Lieberth, Shelia Knott, Stan Johnson, Fred and Nancy Blume, and Rose Blume; as well as a host of nieces, nephews, cousins and close friends. He was preceded in death by his maternal grandparents, Frederick and Freda Blume, his paternal grandparents, Lee and Ruth Johnson, and his uncle Eric Blume. Tributes of memory can be shared with the family at www.craigfunerals.com.

The family of Seth "Zeke" R. Johnson created this Life Tributes page to make it easy to share your memories.