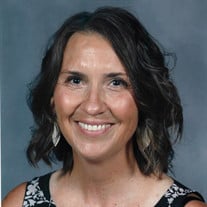 Shannon Lea (Steinhauser) Sis, 56, of Axtell, passed away on Friday, November 20, 2020 at the University of Nebraska Medical Center in Omaha. Funeral services will be held at 10:30 a.m. on Wednesday, November 25, 2020 at Trinity Lutheran Church in Axtell with the Rev. Gale Dorn officiating. The service will be streamed to the church's Facebook page. Interment will be held following services at the Pleasant Hill Cemetery in Axtell. Visitation will be held from 3:00 to 6:00 p.m. on Tuesday, November 24, 2020 at Trinity Lutheran Church in Axtell. The current health recommendations for faith based services will be followed and the use of a face covering is required. In lieu of flowers, memorials in Shannon’s honor are kindly suggested to the family for later designation. Craig Funeral Home in Minden is in charge of the arrangements. Shannon was born on August 17, 1964 in Stuart, Nebraska to Jerry and Sharon (Addison) Steinhauser. She grew up in the Stuart area and received her education at Stuart High School. Shannon was united in marriage to Shannon C. Sis on July 22, 1995 in Stuart, Nebraska. After which the family made their home in Omaha where she was employed by the Oriental Trading Company. The family later moved back to Stuart where Shannon worked at the Stuart Locker and Livestock facility. The family later moved to Axtell where Shannon was employed by the Axtell Community School. She was a member of the Nebraska Education Assoc. and the Teammates mentoring program. She worked the last eight years as a Para at Axtell Community School, where she loved helping all of the kids, especially those with special needs. She enjoyed decorating and making crafts, especially out of old wood. Shannon’s greatest joy in life was being able to watch her son, Parker, grow up and participate in all of his athletic, musical and extra-curricular activities that he endeavored. She was incredibly proud of the man he became. Those left to cherish her memory include her husband, Shannon of Axtell; son, Parker Sis and fiancé, Abbie Obermeier of Axtell; parents, Jerry and Sharon Steinhauser of Stuart; brothers, Scott Steinhauser and wife Nancy of Ainsworth, Dana Steinhauser of Stuart, Jared Steinhauser and wife Jenny of Overland Park, KS; sister, Lisa Steinhauser of Overland Park, KS; as well as a host of nieces, nephews, other relatives and close friends. She was preceded in death by her maternal grandparents, Delbert and Bernice Addison; paternal grandparents, Kathleen and Francis Steinhauser. Tributes and memories can be shared with the family at www.craigfunerals.com.

Shannon Lea (Steinhauser) Sis, 56, of Axtell, passed away on Friday, November 20, 2020 at the University of Nebraska Medical Center in Omaha. Funeral services will be held at 10:30 a.m. on Wednesday, November 25, 2020 at Trinity Lutheran... View Obituary & Service Information

The family of Shannon L. (Steinhauser) Sis created this Life Tributes page to make it easy to share your memories.