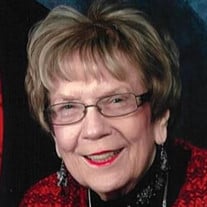 Sharron Anne Loschen, 83, of Kearney, formerly of Hildreth, passed away on Friday, November 27, 2020 at her home. Funeral services will be held at 2:00 p.m. on Tuesday, December 1, 2020 at Trinity Lutheran Church in Hildreth with the Rev. Caroline Keenan officiating. The service will be streamed to the church’s Facebook page. Interment will be held following services at the Emmanuel Lutheran Cemetery south of Hildreth. Visitation will be held from 5:00 p.m. to 7:00 p.m. on Monday, November 30, 2020 at the Trinity Lutheran Church in Hildreth. The current health recommendations for faith based services will be followed and the use of a face mask is required. Memorials in Sharron’s honor are kindly suggested to the family for later designation. Craig Funeral Home is in charge of arrangements. Sharron Anne (Whipple) Loschen was born on November 26, 1937 in Arnold, Nebraska to Ivan and Lola (Hays) Whipple. She grew up in the Callaway and Hildreth areas and attended school at Callaway and graduated from Hildreth High School. She was united in marriage to Gerald Loschen on December 29, 1954 in Hildreth, Nebraska and to this union, three children were born: Gerry, Pam and Kelly. The family made their home in Hildreth before moving out to the family farm outside Hildreth where Sharron was self-employed in various sales jobs and by the Holdrege Daily Citizen, the Thompson Company and Curtis and Associates. Upon retirement, Gerald and Sharron moved to Kearney. Sharron was a member of Emmanuel Lutheran Church in Hildreth; First Lutheran Church and Holy Cross Lutheran Church in Kearney. She led several bible groups at the churches, a member of Kiwanis, and served as President and participated in various bridge groups. She loved teaching both Bible School and Sunday School, stressing the importance of memorizing the 23rd Psalm which she actively recited with her family during her last days. She loved playing bridge and cribbage with her friends and family, and especially any card games with her grandchildren. Sharron enjoyed camping trips, boating and fishing with family and friends at Harlan County Lake. Several years after Gerald passed away, she met a special friend, Al Synovec, and continued many of her favorite activities like dancing, fishing and playing cards. Those left to cherish her memory include son, Gerry Loschen and wife Arlene of Kearney, Nebraska; daughter, Pam Stone of Lawrence, Nebraska; son, Kelly Loschen and wife Joy of Columbus, Nebraska; eight grandchildren and fourteen great-grandchildren; special friend, Al Synovec of Kearney, Nebraska; brother, Kerry Whipple and wife Carolee of Blue Hill, Nebraska; sister, Shannon Adam and husband Lenard of Hildreth, Nebraska; brother-in-law and sister-in-law, Roger and Sharon Rae Loschen of Kearney, Nebraska; sister-in-law, June Loschen of Alma, Nebraska; as well as a host of extended relatives and close friends. She was preceded in death by her husband, Gerald Loschen; son-in-law, Roger Stone; parents, Ivan and Lola (Hays) Whipple; brother-in-law and sister-in-law, Gerald and Janice Christensen; brother-in-law, Gordon Loschen and sister-in-law, Gloria Hinson. Tributes and memories can be shared with the family at www.craigfunerals.com.

Sharron Anne Loschen, 83, of Kearney, formerly of Hildreth, passed away on Friday, November 27, 2020 at her home. Funeral services will be held at 2:00 p.m. on Tuesday, December 1, 2020 at Trinity Lutheran Church in Hildreth with the Rev.... View Obituary & Service Information

The family of Sharron A. Loschen created this Life Tributes page to make it easy to share your memories.

Send flowers to the Loschen family.