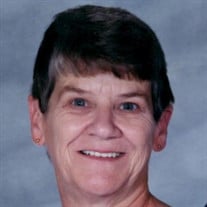 Shirley Ann Phifer, 75, of Franklin, passed away Saturday, June 9, 2018 at Bethany Home in Minden. Funeral services will be held at 10:30 a.m. on Saturday, June 16 at the First Congregational United Church of Christ in Franklin with Pastor Jay Towell officiating. Inurnment will be held following services at Greenwood Cemetery in Franklin. Memorial book signing will be held from 5:00 to 7:00 p.m. on Friday, June 15 at Craig Funeral Home in Minden. She was born on July 3, 1942 in San Diego, CA to Paul and Mabel (Kettleborough) Downey. She grew up in San Diego until age 7 and in 1949 the family moved to Merna, Nebraska. She attended Dale Valley School from second to eighth grade and then attended high school at Merna High School, graduating in 1960. Following high school, she worked at Becton Dickinson in Broken Bow, Nebraska. She was united in marriage to Bernard Phifer, Jr. (Bernie) on December 21, 1963 in Anselmo, Nebraska and after being wed, the couple lived in Mason City, Nebraska where she continued employment with Becton Dickinson. In 1975 they moved to Miami, Texas where she was employed with the school as a custodian. They moved to Franklin, Nebraska in 1979 and she opened and operated a daycare there for many years. In 1985 they purchased The Bullpen, a bar and grill business. They sold the business in 1991 and she worked at Casey’s General Store for 2 years before she started working for Rightway Grocery in 1993, working there until her retirement in 2014. She loved spoiling her grandchildren and always had chocolate milk and candy for them. Her favorite hobby was her flower gardens where she spent many hours making her yard look beautiful with many different varieties of flowering plants. She also loved sharing those flowers with everyone, but the pride of her yard was the fiberglass horse made by her son, Troy. The last two years of her life were spent at Bethany Home in Minden. She dearly loved her Bethany Home family and she was known as “Peppermint Patty” to many of the staff because she loved peppermints and always carried some in her pocket to share with everyone. Shirley is survived by her husband, Bernie Phifer; daughters, Melinda Siel and husband Todd, Raquel Felzien and husband Drew; son, Troy Phifer, all of Franklin, grandchildren, Shane Siel of Lincoln, Kassandra Slocum and husband Bryan of Franklin, Karsen Felzien of Lincoln, Alec Felzien, Tamia Phifer, and Thomas Phifer all of Franklin; sisters, Mary Kay Price of Broken Bow, Ella Mae Mapel and husband Gene of Sparks, Nevada; brothers, Jim Downey, Dick Downey both of Merna, Mike Downey and wife Sheila of Naponee, as well as a host of nieces, nephews, friends and her Rightway Grocery family. She was preceded in death by her parents, Paul and Mabel Downey; brothers, Wayne and Ed Downey; father and mother-in-law, Bernard and Meneda Phifer; sister-in-law, Joan Downey and brother-in-law, Bill Price. Memorials are suggested to the Bethany Home Memory Care Unit. Tributes of memory can be shared with the family at craigfunerals.com Craig Funeral Home is in charge of the arrangements.

Shirley Ann Phifer, 75, of Franklin, passed away Saturday, June 9, 2018 at Bethany Home in Minden. Funeral services will be held at 10:30 a.m. on Saturday, June 16 at the First Congregational United Church of Christ in Franklin with Pastor... View Obituary & Service Information

The family of Shirley A. Phifer created this Life Tributes page to make it easy to share your memories.

Send flowers to the Phifer family.