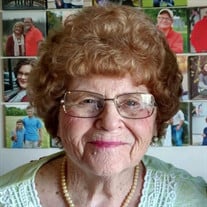 Shirley Mae (Yelken) Quadhamer, 88 of Kearney formerly of Upland, died August 26, 2020 at Kinship Pointe -Kearney Northridge in Kearney. Memorial services will be 10:00 A.M. on Tuesday September 8, 2020 at the First Christian Church in Minden with the Rev. Joe Tira officiating. The current recommendations for faith based services will be followed and the use of a face mask is encouraged. Private family inurnment will be held at the Upland Cemetery. There will be no visitation. She chose cremation. Memorials are suggested to the family for later designation. Craig Funeral Home in Minden is in charge of the arrangements. Shirley was born on May 23, 1932 in Riverton, Franklin County, Nebraska to Carl T. and Bertha L. (Schmidt) Yelken. She grew up on the family farm in Spring Valley area and was baptized August 7, 1932 in the Macon/Spring Valley Methodist Church. Shirley was united in marriage to LaVerne L. Quadhamer on Oct. 8, 1950. They made their home near Hildreth and Upland where they raised their two sons, Steven and Lynn. They left their home of 67 years to move to Brookdale (Kinship Pointe) Kearney Northridge Independent Living Retirement Community. LaVerne passed away July 28, 2018. Shirley was a member of the United Methodist Church in Upland where she would help decorate for the different church events and seasons, held afterschool youth classes, and involved in the many outreach missions. Shirley graduated from the Franklin Public School in 1949 and received a Bachelor of Arts Degree in Education from Kearney State College in 1967. Her teaching endorsement was in Elementary K-6 education and Mild/moderate disabilities K-12 education. She later received her Master’s degree from Kearney State College. She began her teaching career in 1949, where she taught in the rural communities of Franklin and Kearney County until 1973 when she became a Resource instructor for the Minden Public Schools. Shirley retired from full time teaching in 2008, although, she continued her love of teaching by being a substitute teacher for many rural schools until 2016. During her tenure, she received the honor of being awarded Teacher of the Year. Shirley will be remembered by many for her plate of hot cinnamon rolls, her sharing of apples, peaches and vegetables from the garden, her loving and caring manner, and never quavering faith in the power of Jesus. Those left to treasure her memory include her sons, Steven Quadhamer and wife Colleen, and Lynn Quadhamer and wife Cindy, all of Minden; Grandchildren and their spouses, Chad (Casey) Quadhamer, Lindsay (Kyle) Habben, Colt (Brandy) Quadhamer, Ryan (Sara) Neinhuser, and Holly (Justin) Jarecke; great grandchildren, Sierra Quadhamer, Jerad Habben, Jordan Habben, Brayden Nienhuser, Brody Nienhuser, Hannah Bonner and Josie Jarecke; Brother, Tom (Carol) Yelken of Franklin; Sister, Karen (Harry James) Swenson of Lincoln; as well as a host of other relatives and friends. She was preceded in death by her parents Carl Yelken, Bertha Yelken Bartels, and Oscar Bartels. The family would like to extend its deepest gratitude to the staffs of Kinship Pointe Kearney Northridge, Brookstone Gardens, and AseraCare Hospice for their wonderful care and compassion. Tributes and memories can be shared with the family at www.craigfunerals.com.

The family of Shirley M. Quadhamer created this Life Tributes page to make it easy to share your memories.

Send flowers to the Quadhamer family.