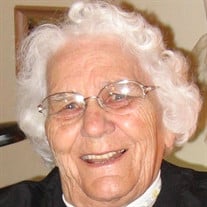 Shirley Ione (Taylor) Strine, 101 years of age, of Minden, passed away on Sunday, February 10, 2019, at Bethany Home in Minden. Funeral services will be held at 2:00 p.m. on Friday, February 15, 2019 at the First Christian Church in Minden with the Rev. Joe Tira officiating. Interment will be held following services at the Minden Cemetery. There will be no visitation. Memorials in Ione’s honor are kindly suggested to First Christian Church or to Bethany Home, both in Minden. Craig Funeral Home is in charge of the arrangements. Ione was born to Howard and Martha Taylor in Minden NE on March 9, 1917. She was the oldest of four, and had three younger brothers. As there were several Shirleys in her class, she decided to go by her middle name, and only the government thereafter called her Shirley. She graduated from Minden High School in 1935. While a young girl she was active in sports playing basketball and softball. As an adult she played golf and bowled, accumulating many trophies marking her accomplishments and tournament winnings. In August of 1942 she married Laurence Strine. They were married for 73 years. They had two daughters, Ann and Trudy. Ione helped with Girl Scouts and was the co-leader of 4-H clubs for both daughters. She baked hundreds of batches of cookies for her kids and their friends. She drove car loads of girls to ball games, state fair, 4-H contests. She worked at Hested’s store for six years and, after a break to raise her children, for Minden Exchange Bank for 22 years. Ione was very active in her church, First Christian Church of Minden. She helped with the construction of the current building, led youth groups with Laurence, taught Sunday School for 43 years and junior church for 15 years. She was on the church board, and held offices in the women’s groups. Ione was a good cook and was known for her burnt sugar cake. Even though she shared the recipe, no one ever made it quite like she did. She was an avid gardener and her tomatoes and raspberries brought her great joy. After retirement Ione and Laurence enjoyed traveling to visit their daughters, and some trips around the country with friends including New York, Washington DC, and twice to Hawaii. They moved to Bethany Home in 2011. Ione enjoyed the companionship at Bethany Home and playing Som-R-Set with friends. Her beloved husband, Laurence, preceded her in death, as did three brothers. She is survived by her daughters Ann Strine (Clyde Cross), and Trudy Strine Hoffman (Richard Hoffman), and grandsons John Hoffman, Allen Hoffman (Daffney Hoffman), great grandchildren Aubree, AJ and Cooper Hoffman, nephew Howard Taylor, nieces Sandra Taylor Howerter (Ron) and Patty Taylor. Tributes of memory can be shared with the family at www.craigfunerals.com.

Shirley Ione (Taylor) Strine, 101 years of age, of Minden, passed away on Sunday, February 10, 2019, at Bethany Home in Minden. Funeral services will be held at 2:00 p.m. on Friday, February 15, 2019 at the First Christian Church in Minden... View Obituary & Service Information

The family of Shirley "Ione" Strine created this Life Tributes page to make it easy to share your memories.

Send flowers to the Strine family.