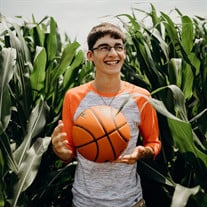 Sidney W. Fiske, 18, of Funk, formerly of Minden, passed away on Friday, June 14, 2019 near Sutherland, as the result of an automobile accident. Celebration of Life services will be held at 1:30 p.m. on Thursday, June 20, 2019 at the St. Paul Lutheran Church in Minden with the Rev. Christopher Hazzard and Rev. Donald Becker officiating. Private family burial will be held at a later date at the Minden Cemetery. Visitation will be held from 5:00 to 7:00 p.m. on Wednesday, June 19, 2019 at the Craig Funeral Home in Minden. In lieu of flowers, the family requests memorials in Sidney’s honor to establish the Sidney Warren Fiske Memorial Scholarship Fund. Craig Funeral Home is in charge of the arrangements. Sidney was born October 11, 2000, in Manhattan, Kansas, to Jason Fiske and Tonya (Griffiths) McCroden. He attended Minden Public Schools from Preschool to 6th grade. He then attended Axtell Community School from 7th grade through his sophomore year. His Junior and Senior years were completed at Morrill Public School, and he received his high school diploma on May 11, 2019. Throughout his academic career, he was a whippet, a wildcat, and a lion. All three school districts welcomed Sidney and adopted him as part of their family. He was a member and baptized into the St. Paul Lutheran Church in Minden on April 19, 2015, and was confirmed May 3, 2015. Sidney enjoyed being with his family and friends and being the highlight of the moment. He had an infectious smile and the charm to win over people. His passions included basketball, demolition derbies, farming, and spending time at the lake with family and friends. His happiest moments were spent on the court, enjoying the sport of derbying, and driving a tractor at harvest. He was a friend to all who met him and loved making people laugh. Throughout his life, he made an impact on everyone because of his free spirit and light hearted demeanor. Sidney was a loyal brother and was patient and compassionate toward his siblings. His family was extremely important to him and he kept them on their toes with his escapades and adventures. Sidney is survived by his mother and stepfather, Tonya and Dave McCroden of Minden; father and stepmother, Jason Fiske and Andrea Sprague of Henry; brothers Quenton Timm of Funk, Griffiths McCroden of Minden; sisters, Abigail Fiske of Minden, Kyndall, Paige, and Maicee Sprague of Henry, grandparents Dennis and Kathryn Griffiths of Abilene, Kansas; Dennis and Mary Rider of Abilene, Kansas; Kenny and Mich Fiske of Salina, Kansas; Neal and Gailene Benson of Kearney; Ronda and Terry Booth of Holdrege, great- grandparents, Leona Fabrizius of Minneapolis, Kansas; Hazel and Leon Fox of Holdrege, and numerous aunts, uncles, and cousins. He was proceeded in death his maternal and paternal grandparents, great-grandparents, and great aunts and uncles. Tributes of memory can be shared with the family at www.craigfunerals.com.

The family of Sidney W. Fiske created this Life Tributes page to make it easy to share your memories.

Send flowers to the Fiske family.