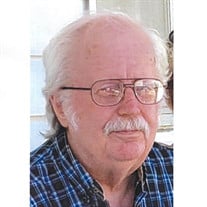 Steven L. Ockinga, 71, of Minden, passed away on Tuesday, November 10, 2020 in Minden. The family has honored Steve’s wish to be cremated and to have no services. Private family inurnment will be held at a later date at Parkview Cemetery in Hastings. Memorials in Steve’s honor are kindly suggested to the family for later designation. Craig Funeral Home in Minden is in charge of the arrangements. Steven Lee was born on February 7, 1949, in Hastings, to Delmar L. and Geraldine L. (Bergman) Ockinga. He graduated from Hastings Senior High School in 1967. He later graduated from Central Nebraska Technical College in 1969. Steven entered the United States Air Force in August of 1969 and faithfully served his country until July of 1973. Steven served most of his military time at the Rhein-Main Air Force Base in Frankfurt, Germany. Steven worked at Kansas-Nebraska Gas Company in Hastings and Woodard-Governor in Ft. Collins, CO. He returned to Minden when he retired. Those left to cherish his memory include his mother, Geraldine Carlson of Hastings; sister, Sharon Sara of Cheyenne, WY; nephew, Joseph (Courtney) Sara, Jr.; great-nephews, Kellen and Kaysen Sara, all of Springfield, GA; nephew, Christopher Sara of Cheyenne, WY; cousins, Mark (Karla) Bergman and family of Hastings, David (Kathy) Bergman of Roseland, Kristi (Mike) Price and family of Texas; step-sisters, Jeanne Hinz and Linda Heithbrink; as well as a host of extended relatives and friends. He was preceded in death by his father, Delmar Ockinga; maternal grandparents, George and Edith Bergman; paternal grandparents, Phillip and Dora Ockinga; and step-father, Homer Carlson. Tributes and memories can be shared with the family at www.craigfunerals.com.

Steven L. Ockinga, 71, of Minden, passed away on Tuesday, November 10, 2020 in Minden. The family has honored Steve&#8217;s wish to be cremated and to have no services. Private family inurnment will be held at a later date at Parkview Cemetery... View Obituary & Service Information

The family of Steven L. Ockinga created this Life Tributes page to make it easy to share your memories.

Steven L. Ockinga, 71, of Minden, passed away on Tuesday, November...

Send flowers to the Ockinga family.