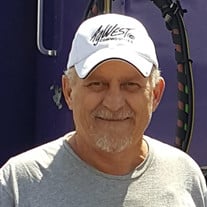 Steven Leroy Steinkruger, 55, of Upland, passed away on Friday, March 9, 2018 at his home in Upland. Memorial services will be held at 10:00 a.m. on Friday, March 16, 2018 at the Minden United Methodist Church with the Rev. Paul Blanchard officiating. Private family burial will take place at a later date at the Macon Cemetery. There will be no visitation as the family is honoring Steve’s wishes to be cremated. Steve was born on December 21, 1962 in Franklin to Merle and Colleen (Marran) Steinkruger. He graduated from Minden High School. On March 25, 2010, he was united in marriage to Lisa M. Nielsen in Franklin. Steve enjoyed hunting, fishing, camping and being outdoors. He loved taking care of his two dogs, Eddy and Otis. Steve was an avid follower and supporter of his Niece and Nephew’s racing team, where he was often referred to as “The Owner”. He was also very active in 4-H and had a real love of showing horses and cattle. Steve took great pride in teaching 4-H archery safety. Steve was a member of the Son’s of the American Legion, the Upland United Methodist Church and later the Minden United Methodist Church. Steve worked various jobs. In May of 2017, he purchased and operated his own trucking business, Steinkruger Brothers Trucking. Those left to cherish his memory include his wife, Lisa Steinkruger of Upland; mother, Colleen Steinkruger of Upland; Step-children, Susan and husband Chad Fries of Minden and Scott and wife Savannah Johnson of Minden; grandchildren, Gage, Gracie and Bailee Fries and Hailey, Rilynn and Landon Johnson, all of Minden; sister, Tammy Johnson of O’Fallon, MO; brother, Jim and wife Brandi Steinkruger of Upland; nephews, Luke Johnson of O’Fallon, MO and Dylan Steinkruger of Upland; niece, Emma Steinkruger of Upland, as well as a host of other relatives and friends. He was preceded in death by his father Merle and brother-in-law, Ed Johnson. Memorials are suggested to the family for later designation. Craig Funeral Home is in charge of the arrangements.

Steven Leroy Steinkruger, 55, of Upland, passed away on Friday, March 9, 2018 at his home in Upland. Memorial services will be held at 10:00 a.m. on Friday, March 16, 2018 at the Minden United Methodist Church with the Rev. Paul Blanchard... View Obituary & Service Information

The family of Steven L. Steinkruger created this Life Tributes page to make it easy to share your memories.

Steven Leroy Steinkruger, 55, of Upland, passed away on Friday,...

Send flowers to the Steinkruger family.