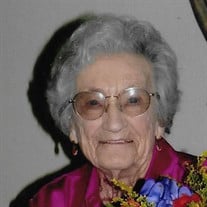 Thelma Augustin, 105 years of age, formerly of Juniata, Nebraska died on July 15, 2017 at the Kearney County Health Services-Hospital in Minden. Services will be Friday, September 15, 2017 at 11:00 a.m. at the Zion Lutheran Church in Hastings with Rev. Paul Warneke officiating. Burial will be prior to the memorial service in the Christ Lutheran Cemetery in Prosser. Thelma Augustin was born on October 8, 1911 in the family farm home near Juniata, Nebraska. Thelma was the oldest child of Albert Katzberg and Mary (Reiners) Katzberg. Thelma was baptized on October 9, 1911, into the Missouri Synod Lutheran faith by Pastor William Landgraf. She was confirmed at Christ Lutheran Church, near Prosser, Nebraska, on May 9, 1926. Thelma attended grades one through eight at District 16, a one-room rural school, located approximately one mile from her home. She lived the first 96 years of her life in three different homes, within two miles of each other, which were located on 12th Street in Adams County. In 2008, after major spinal cord surgery in Lincoln, Nebraska, Thelma moved to an apartment in Village Green in Hastings, Nebraska. Later moved to Hinterlong in Minden. On February 3, 1935, during the Dust Bowl years and the Great Depression, she married Orval Augustin of rural Juniata, Nebraska. Orval and Thelma were married for 52 years and had three boys. Gary was the oldest and Byron and Bruce were identical twins. Thelma was a member of Zion Lutheran Church of Hastings, Nebraska for many years. She participated in the Lutheran Women’s Missionary League including service as an officer on several occasions. For more than thirty years she provided altar flowers for the church from her special flower garden, which she tended with loving care. Guests were always welcome in her home where they were treated with hot coffee, iced drinks and freshly baked pie, cookies, or bread. Her pies were so enjoyed, she was affectionately known by family and friends as “The Pie Lady.” Thelma was preceded in death by her parents, her husband Orval, her son Bruce, her grandson Mark and four siblings including Walter Katzberg, Wilber Katzberg, Lenora Stulken and Ruth McCasland. She is survived by sons Gary Augustin and his wife Charla as well as Byron Augustin and his wife Rebecca. Surviving grandchildren include Bruce Augustin and his wife Sarah, Kelly Bockholt and Andrew Goudge. She is also survived by one great-grandchild, Cason Bockholt, as well as sister Dora Herman and a host of nephews, nieces, and friends. In lieu of flowers, contributions may be made to the Memorial Committee at Zion Lutheran Church, the Juniata Volunteer Fire Department, or Concordia Cemetery near Prosser, Nebraska.

Thelma Augustin, 105 years of age, formerly of Juniata, Nebraska died on July 15, 2017 at the Kearney County Health Services-Hospital in Minden. Services will be Friday, September 15, 2017 at 11:00 a.m. at the Zion Lutheran Church in Hastings... View Obituary & Service Information

The family of Thelma Augustin created this Life Tributes page to make it easy to share your memories.

Send flowers to the Augustin family.