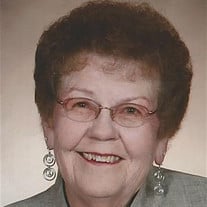 Thelma I. Scheidies, 87 years of age from Kearney, Nebraska died on Thursday, December 8, 2016 at her home in Kearney. Funeral services will be on Tuesday, December 13, 2016 at 11:00 a.m. at the Holy Cross Lutheran Church in Kearney with Reverend Duane Duley officiating. Graveside services will be at the Minden Cemetery at 2:00 p.m. that afternoon. Visitation will be at the Layton-Craig Funeral Home in Minden on Monday from 5-7 p.m. Memorials are suggested to the Holy Cross Lutheran Church in Kearney or the St. Paul Lutheran Church near Lowell. Thelma was born on May 29, 1929 in Minden, Nebraska to Anton and Hannah (Smith) Jepsen. Thelma grew up in the Minden area and attended Minden Public School. Thelma worked as a hairdresser for a time in Minden. On January 12, 1951 she married Robert Scheidies at the United Methodist Church in Minden. They lived and farmed near Lowell. Thelma was a busy farm wife, raising chickens, gardening and canning for her family. She was a great cook and her children will always remember her egg salad sandwiches and the rhubarb custard pies. Thelma enjoyed playing cards with friends and family. They retired and moved into Kearney in 1986. She was a caregiver for her husband until he passed away in 1993. She was a member of the Holy Cross Lutheran Church in Kearney, Red Hat Society in Kearney, Danish Brotherhood in Minden, Birthday Club and card clubs. Thelma worked the gift shop at Holiday Inn and also volunteered at the gift shop at the Good Samaritan Hospital. Survivors include her children, Michael Scheidies and wife, Mary of Farmington, Michigan, Carol Prussa and husband, Mike of Kearney, Roger Scheidies and wife, Elizabeth of Kearney and Tammy Olson and husband, Darcy of Gibbon; three grandchildren; two step grandchildren; one great grandson and two step great grandchildren; sister, Nina Garrelts of Minden; sister in-law, Nita Rae Jepsen of Shelton and many nieces and nephews. She is preceded in death by her husband, five brothers, three sisters, friend Dick Moffett and several brothers in-law and sisters in-law.

Thelma I. Scheidies, 87 years of age from Kearney, Nebraska died on Thursday, December 8, 2016 at her home in Kearney. Funeral services will be on Tuesday, December 13, 2016 at 11:00 a.m. at the Holy Cross Lutheran Church in Kearney with Reverend... View Obituary & Service Information

The family of Thelma I. Scheidies created this Life Tributes page to make it easy to share your memories.

Thelma I. Scheidies, 87 years of age from Kearney, Nebraska died...

Send flowers to the Scheidies family.