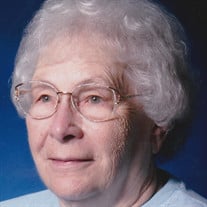 Urva Lou Frerichs, 95, of Minden, formerly of Upland, passed away on Wednesday, January 10, 2018 at Kearney County Health Services – Countryside Living in Minden. Celebration of life services will be held at 11:00 a.m. on Saturday, January 20, 2018 at the Minden United Methodist Church with the Rev. Paul Blanchard officiating. Interment will be held at 2:00 p.m.at the Greenwood Cemetery in Franklin, NE. There will be no visitation as the family is honoring Urva Lou’s wish to be cremated. Craig Funeral Home is in charge of the arrangements. Urva was born April 18th, 1922 in Franklin, Nebraska to Clarence and Elizabeth (Garrett) Prusia. After graduating from Franklin High School in 1940, she was accepted into Bethany Methodist Hospital school of nursing in Kansas City, Kansas. While in Kansas City she was married to Clarence E. Ross. Their union was blessed with a son, Ross, but ended in divorce. In the mid 40's Urva returned to Franklin to be close to friends and family. While in Franklin, Urva was employed at the Franklin County Memorial Hospital for several years assisting in labor and delivery, surgery and other areas of the hospital. On December 29, 1951 she married Fritz Frerichs and to this union a daughter and a son were born. Urva and Fritz lived most of their years in Upland and celebrated over 40 years of marriage before Fritz's passing in 1992. In the early 60's Urva started employment at the medical clinic in Minden working with Doctors Butler, Prince and Finkner. She continued to work there until her retirement. Urva briefly lived in Kearney before she moved to Minden. She became a resident of Hinterlong living in 2013. Urva enjoyed traveling abroad with her sister and brother-in-law to Switzerland, a family reunion cruise to Alaska and many road trips and flights to St. Louis. Her greatest enjoyment was spending time with her family and friends. Each Memorial Day weekend she made it a point to attend her class reunion and was determined the next generations of her family knew their ancestry in the Greenwood Cemetery. She was an excellent seamstress making prom dresses for her daughter and granddaughters, wedding veils and knitted and crocheted items. She was a member of the American Legion Auxiliary for 79 years and taught her children and grandchildren the importance of respecting the flag. Urva had an unwavering faith in God which was exemplified in her daily living. She was a proud member of the United Methodist Church. She is survived by her sister Estelle Sorenson of Fort Worth, TX, daughter, Connie Jorgensen of Minden, and son, Thomas Frerichs and his wife Corinne of Troy, Illinois; seven grandchildren and 16 great-grandchildren and many nieces and nephews. Urva was preceded in death by her husband, parents, brothers, Don, Charles, Richard, and Elmer LeRoy; sisters, Dorothy Sorenson, and Carolyn Barber; son, Ross, and son-in-law, William Jorgensen III. Memorials are suggested to the family for later designation.

The family of Urva Lou Frerichs created this Life Tributes page to make it easy to share your memories.