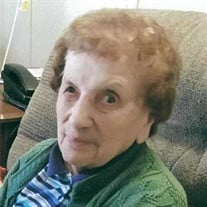 Velma Ann Mietzner, 100, of Hildreth, passed away June 13, 2019 at Bethany Home in Minden. Funeral services will be held at 11:00 a.m. on Monday, June 17, 2019 at the St. John’s Lutheran Church in Wilcox with the Rev. Nathan Abel officiating. Private family interment will be held prior to services at the St. John’s Lutheran Church Cemetery, south of Wilcox. Visitation will be held from 5:00 to 7:00 p.m. on Sunday, June 16, 2019 at the Craig Funeral Home – Jelden Chapel in Hildreth, the casket will be closed. Memorials in Velma’s honor are kindly suggested to the family for later designation. Craig Funeral Home is in charge of arrangements. Velma was born December 14, 1918 near Bladen, NE in Webster County to William and Marie (Bartels) Titkemeier. She was baptized January 12, 1919 at Trinity Lutheran Church in Campbell, NE, and was confirmed in 1932 at St. John’s Lutheran Church in Wilcox, NE. Her Confirmation verse was Colossians 3:17. She was the second in a family of five girls, and had fond memories of growing up on the farm south of Wilcox. She attended St. John’s Lutheran School and graduated from Wilcox High School with the class of 1936. On May 12, 1940, she united in marriage Julius Mietzner at St. John’s. They made their home south of Wilcox, before moving to Hildreth in 1949. They were blessed with three children: Douglas, Dennis and Deborah. Julius passed away in September of 1975. Velma was a homemaker, but over the years she did a lot of babysitting for family and friends. She made wonderful homemade chocolate cake, cinnamon rolls and pies, especially lemon meringue. She was a member of St. John’s Lutheran Church in Wilcox, where she was a Sunday School teacher, as well as a charter member of L.W.M.L. She loved her church and her church family. Quilting was also a favorite activity. She helped the church ladies make many quilts for Lutheran World Relief. Velma enjoyed card games, playing with both Canasta and Bridge groups. She also liked a good scrabble game. Family and friends were very important to her. She loved her family and attended many of their activities. When she was no longer able to travel, she cherished pictures and visits. Those left to cherish her memory include her children, Douglas (Miriam) Mietzner, Dennis Mietzner, Deborah (Randall) Albers and Nancy Mietzner, all of Hildreth; grandchildren, Kristi Mietzner (Luis Baga), Sara Mietzner (Matt Palmatier), Angi Mietzner, Julie (Matt) Rossow, Erin (Jeremy) Behrens, and Lindsay (Mike) Kant; great-grandchildren, Anna Milena and Sebastian Baga, Lydia, Joaquin, Luca and Issa Palmatier, Kaitlynn and Brayden Rossow, Bryce, Mason and Laine Behrens, and Anna and Miles Kant; sister, Phyllis Verbeck of Funk, NE; as well as many nieces, nephews, relatives and friends. She was preceded in death by her husband, an infant grandson and her parents, as well as sisters, Elvera Amen, Lorna Thompson, Ilene Vogel and brothers-in-law Melvin Amen, Kenneth Thompson, Theodore Vogel and Don Verbeck. Tributes of memory can be shared with the family at www.craigfunerals.com.

The family of Velma A. Mietzner created this Life Tributes page to make it easy to share your memories.

Send flowers to the Mietzner family.