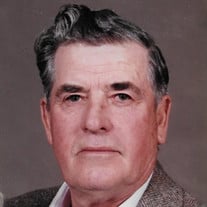 VERLIE EDWARD LUSH Verlie Edward Lush, 92 years of age, from rural Wilcox, died Tuesday, December 27, 2016 at his home southeast of Wilcox. Funeral services will be on Saturday, December 31st, 2016 at 10:30 a.m. At the Trinity Lutheran Church in Hildreth with Reverends Patti and Steve Byrne officiating. Visitation will be at the Jelden-Craig Funeral Home in Hildreth from 4-6 p.m. on Friday. Private family burial will be in the Moline Cemetery southeast of Wilcox. Verlie Edward Lush was born the ninth child of Lemuel William Lush and Clara Loretta (VanDyke) Lush on April 18, 1924 near Ragan in Harlan County, Nebraska just a few minutes after his twin sister, Velma. Verlie attended the Busy Bee Rural School District No. 67 near Ragan in Harlan County. He graduated from Atlanta High School in Harlan County with the class of 1941. It was in Holdrege that he met the love of his life, Phyllis Elaine Caspers, at a café there in town. They were married on October 5th, 1951. From this marriage eight children were born, three boys and five girls. Verlie loved being around his family and when his children were young they all enjoyed going to small ponds in the area and fishing. They lived in and farmed near Ragan on a farm that has been in the Family for 136 years. In 2003 Verlie received the AKSARBEN Pioneer Family Award for having a piece of farmland in the same family for over 100 years. The family then moved to Phyllis’s family farm near Wilcox, which was near the old Mennonite settlement of Moline. Verlie farmed in this area where the four counties of Kearney, Harlan, Franklin and Phelps meet with his three sons, Gale, Ron, John and later a Grandson, Alex until he died. Verlie was a progressive farmer who was involved in irrigated agriculture. He was also a water witcher and prided himself on being pretty good at finding water on dry land where others had given up. Once, a few minutes before a land sale Dad witched out a well that he thought would be a good one. Unbeknownst to him, test wells had already been drilled by others and six feet of sandy dirt was the best test they could find. The bidders at the sale considered the land was going to be dry land. The well Dad witched out produced 1200 gallons a minute and turned some dry land into a productive irrigated farm. Verlie loved his herd of registered Angus cattle. The saddest day of his life was when he sold the herd so the pastures could recover from the drought of 2002. He enjoyed selling Cargill Seed Corn for 32 years. Dad grew up during the “Dirty Thirties” and remembered the clouds of dust, dried up crops, and the hard times that followed. He was very conservation minded and incorporated various water and soil saving practices on his farm. Verlie’s last ten years were spent mostly at his home that he and his wife Phyllis built in 1980. Dad had Parkinson’s’ and did not get out much after his grandson Alex’s wedding in 2008. His wife of 63 years took care of him after he could no longer walk. The many nurses and caretakers who helped take care of him became part of our extended family. Verlie was born and raised a Southern Baptist until he married Phyllis Caspers October 5th, 1951 at St. Peter’s Lutheran Church in Hildreth. He later became a member of Trinity Lutheran Church of Hildreth which is a successor church of three other Lutheran churches in the area. Survivors include: three sons: Gale Lush and wife Laurie of Wilcox, Ron Lush and wife Shirley of Wilcox, and John Lush and wife, Roxanne of Holdrege; five daughters, Linda Brummer and husband Wayne of Wilcox, Rhonda Roberts and husband, Greg of Funk, Ramona Wilder and husband Mark of Kearney, Trish Kronhofman and husband, Galen of Alma and Shirley Loschen and her fiancé Bruce Steinkruger of Upland; 16 grandchildren; 25 great grandchildren and a sister-in-law, Karen Van Horne of Omaha. Verlie was preceded in death by his wife Phyllis E. Lush who passed away January 30th, 2015. He was preceded in death by his parents Lemuel William Lush and wife Clara Loretta (Van Dyke); his Father and Mother in-law John and Margaret (Myers) Caspers; three brothers, Albert Lush and his wife Leona, Lloyd Lush and his wife Evelyn, and Warren Lush and his wife Eula Mae; five sisters, Bertha Lush, Alpha Lewton and husband Lloyd , Millie Lush , Mabel Hill and husband Adam, and twin sister Velma Gump and husband Fred; and a brother-in-law Michael Van Horne. Memorials may be given to Wilcox Volunteer Fire Department, the Moline Cemetery, and/or Trinity Lutheran Church.

The family of Verlie E. Lush created this Life Tributes page to make it easy to share your memories.

Send flowers to the Lush family.