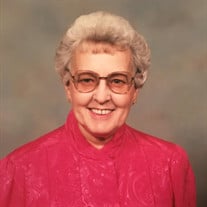 Viola Johnson Eckhoff, 95, of Minden passed away on Monday, December 16, 2019 at Bethany Home in Minden. Funeral services will be held at 2:00 p.m. on Monday, December 23, 2019 at the Bethany Home Chapel with the Rev. Sharon Rees officiating. Visitation will be held one hour prior to service time at the Bethany Home Chapel. Interment will be held following services at the Minden Cemetery. Memorials in Viola’s honor are kindly suggested to Bethany Home in Minden. Craig Funeral Home is in charge of the arrangements. Viola was born on April 22, 1924, in Hastings, Nebraska to Charles and Lelia Anderson. The family lived on a farm west of Minden for several years before moving to Minden. She graduated from Minden High School with the class of 1941. On June 16, 1946, Viola was united in marriage to Harold Lewis Johnson in Minden. Viola and Harold were blessed with three daughters: Patricia, Mary, and Carol. Viola was a homemaker for many years before returning to work at the 1st National Bank, Minden, until retirement in 1986. Viola was dedicated to her numerous volunteer activities including reading to elementary children, delivering Meals on Wheels, working for and organizing periodic blood drives, helping organize class reunions, providing support and guidance to several elderly friends, and many more. She was very active in Minden’s First Presbyterian as well as the Westminster United Presbyterian Churches. Besides volunteering, Viola thoroughly enjoyed crocheting items for newborn babies, attending her grandchildren’s school activities, and spending time with her family. She also loved bowling and participated on a women’s league for 50 years! Viola was preceded in death by her parents, husband Harold L Johnson, daughter Mary Major, and second husband Francis Eckhoff. Those left to cherish her memory include daughter Patty (Tom) Hoffman of Ankeny, Iowa; daughter Carol Bontz of Minden; and son-in-law Jamie Major (Sandy) of Papillion. Viola had eight grandchildren: Kristi (Matt) Oltman, Erin Hoffman, Jenna (AJ) Lindstrom, Josh Bontz, Evan Major, Susannah Major, Krista (Travis) Stoecker, and Ryan Major. She also had four great-grandchildren: Kaden, Maryn, Oliver, and Elle. Tributes of memory can be shared with the family at www.craigfunerals.com.

The family of Viola Johnson Eckhoff created this Life Tributes page to make it easy to share your memories.

Viola Johnson Eckhoff, 95, of Minden passed away on Monday, December...

Send flowers to the Eckhoff family.