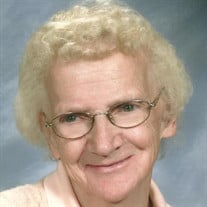 Viola J. Sinsel, 81, of Minden, NE passed away on Tuesday, November 28, 2017 at Kearney County Health Services – Long Term Care in Minden. Funeral services will be held at 10:30 am. on Friday, December 1, 2017 at the Minden United Methodist Church with the Rev. Paul Blanchard officiating. Interment will follow services at the Minden Cemetery. Visitation will be held from 4:00-7:00 p.m. on Thursday, November 30, 2017 at the Craig Funeral Home in Minden. Craig Funeral Home is in charge of the arrangements. Viola June Johansen was born on April 13, 1936 in Heartwell, NE to George and Anna (Torske) Johansen. She grew up in the Heartwell area and graduated from Minden High School in 1953. She attended Nebraska State Teachers College at Kearney and then taught rural school at District 8 in Kearney County. She was united in marriage to Edward Sinsel, Jr. on June 20, 1958 and they farmed in the Minden area. They later divorced. In 1979 she was employed as a CNA by Kearney County Health Services Long Term Care and worked there for 29 years. She was a member of the United Methodist Church and an avid fan of Husker sports and Kansas City Royals Baseball. Survivors include sons, Dean Sinsel and his wife, Karma, of Minden. Casey Sinsel of Minden, Kelly Sinsel and his wife, Michelle, of York and George Sinsel and his wife, Stacy, of Minden; daughter, Dianne Redden and her husband, Bernie, of Fairfax, IA; nine grandchildren and two great-grandchildren; and sister, Verla Steiner of Inavale. She was preceded in death by her parents, five brothers, five sisters, one son, and one grandson. Memorials are suggested to Kearney County Health Services or to the Minden United Methodist Church.

The family of Viola J. Sinsel created this Life Tributes page to make it easy to share your memories.

Send flowers to the Sinsel family.