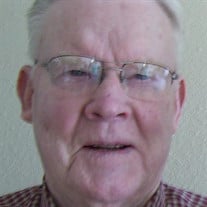 Wayne Leslon Olson, 96, of Minden, passed away on Wednesday, January 17, 2018 at Kearney County Health Services in Minden. Funeral services will be held at 11:00 a.m. On Tuesday, January 23, 2018 at Fredericksburg Lutheran Church near Minden with the Rev. Donald Hunzeker officiating. Private family burial will take place prior to the services at the Minden Cemetery. Visitation will be held from 4:00 to 6:00 p.m. on Monday, January 22, 2018 at the Craig Funeral Home. Craig Funeral Home is in charge of the arrangements. Wayne was born on October 6, 1921 to Martin and Ida (Reitan) Olson, along with his twin brother Willard on the family farm in rural Minden. They were the first grandchildren for John and Anna Reitan and they had seven doting Aunts and Uncles. Wayne attended school at District 34 and Minden High School, graduating with the class of 1941. He met Esther Warnken when they were in a play together at District 34, where Esther was teaching. They were married on June 18, 1944. The couple was blessed with three children: Dorothy (Jim) of Ogallala, NE, Mary Ann (Stan) Napier of Leesburg, FL and Stephen (Debbie) Olson who live and work on the family farm south of Minden. Grandchildren are Jason and Jeremy Glenn, Nick and Brent Napier, Stephanie (Brock) Emery and Amber (Nick) Napier. Great-grandchildren, Maddi, Myla, Malayna and Bella. Esther passed away in 1976. In 1979, Wayne married Elaine Nielsen and gained a son, Bill (Sharry) Nielsen and three grandchildren, Rick, Tracy and John. Elaine passed away in 1982. In 1990, Wayne married Wanda Soucie and gained another daughter, Claudia (Doug) Anderson and son, Bob (Carrie) Soucie and grandchildren, Laura, Mary, Andrew, Thomas, Emily, Julienne, Madeleine, Sam, Elisabeth, Grace and Annaclaire. Wanda passed away in 2007. Even after retiring from farming, Wayne continued to help sons Steve and Bob on their farms. He worked 83 consecutive harvest seasons beginning at age 12 and lived through 17 Presidents. He enjoyed many afternoons at the Senior Center playing pool and Some-R-Set with his friends. Wayne loved his grandchildren and great-grandchildren very much and enjoyed a rich, fulfilling life of 96 years. Wayne is survived by his children, grandchildren, great-grandchildren, twin brother, Willard, as well as many cousins, other relatives, and fellow Some-R-Set players. Wayne was preceded in death by his parents and wives, Esther, Elaine and Wanda who he was blessed to have shared his life with. Memorials are suggested to Bethany Home in Minden, Minden Senior Center or to the donor's choice.

The family of Wayne L. Olson created this Life Tributes page to make it easy to share your memories.

Wayne Leslon Olson, 96, of Minden, passed away on Wednesday,...