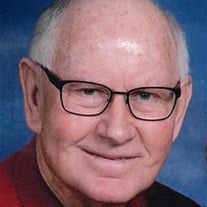 Wendell G. Jensen, 88, of Minden, passed away on Sunday, June 24, 2018 at CHI Health – Good Samaritan in Kearney. Funeral services will be held at 10:30 a.m. on Thursday, June 28, 2018 at the Minden United Methodist Church with the Rev. Melody Adams officiating. Interment will be held following services at the Minden Cemetery. Visitation will be held from 5:00 to 7:00 p.m. on Wednesday, June 27, 2018 at the Craig Funeral Home in Minden. Wendell George Jensen was born on November 29, 1929 on his parents’ farm northwest of Minden. He grew up on the farm and loved the work of a farmer, including milking a dozen cows while his Dad sang Wendell’s favorite songs. He enjoyed helping with the harvest and other farm work. He graduated from Minden High School in 1947. During high school he participated in a Hastings College Spanish study group in Mexico City. He later attended Nebraska Wesleyan University and graduated from the University of Nebraska in 1951. On September 1, 1950 Wendell married Thelma Lundeen, his high school sweetheart. He relished singing the song “Linda” to her, a popular song of the day, and affectionately called her “Linda”. They enjoyed over 67 years of matrimony. After graduating college Wendell taught high school Spanish, English and Social Studies in Bloomington, Aurora, and Minden, Nebraska. Following his teaching career he became an agent with The Principal Financial Group, earning his Certified Life Underwriter, qualifying for Premier Club for 33 consecutive years, and becoming a member of the company Hall of Fame. He was also a lifetime member of the Million Dollar Roundtable. Wendell’s main passion was his family: his wife Thelma, their four sons and daughters-in-law, nine grandchildren and six great-grandchildren. Wendell was incredibly proud of his sons. Randy and Todd joined him as agents at The Principal. Ron became an attorney, appearing before the U.S. Supreme Court, and Brian became an engineer with Caterpillar, Inc. Wendell loved to travel and took his family on numerous camping, boating, and fishing trips. Wendell and Thelma enjoyed traveling the U.S. in their motor home, trips to most of Europe, parts of Russia, and China. Travel highlights included a dance tour to China including a square dance on the Great Wall. Wendell and Thelma enjoyed both square and round dance and spent many enjoyable hours with both Minden and Texas area clubs. For many years, Wendell and Thelma wintered in southern Texas where they danced and made friends from all over the country. Wendell’s lasting passions included his love of art and gardening. His creative talents provided treasured paintings and a masterpiece landscape integrating over 500 of his favorite trees, bushes and flowers. Wendell also enjoyed driving and sharing his antique cars. Wendell was a life time member of the United Methodist Church where he served as a Sunday School teacher and superintendent, a member of the church building committee, and was president of the Methodist Men. He was also a long time member and president of the Minden Rotary Club and acted in the Minden Christmas pageant for many years. Whether cheering for his Huskers, working in the garden, painting masterpieces for family, traveling the world or playing with his beloved grandchildren, Wendell’s passion for life was reflected in all he did. Wendell is survived by wife Thelma (Lundeen) of Minden, sons Ron (Therese) Jensen of Omaha, Randy (Sheri) Jensen of Kearney, Brian (Karen) Jensen of Dunlap, IL and Todd Jensen of Minden, grandchildren and spouses, great-grandchildren, extended family and friends. Wendell was preceded in death by parents Charles R. and Bertha A. (Kring) Jensen, brother Dawain and sister Lois. Memorials are suggested to the Minden United Methodist Church or to the Minden Opera House in care of the Kearney County Community Foundation. Tributes of memory can be shared with the family at www.craigfunerals.com.

The family of Wendell G. Jensen created this Life Tributes page to make it easy to share your memories.

Send flowers to the Jensen family.