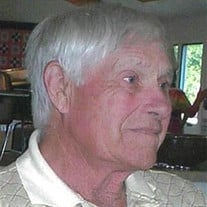 Wesley Howard King, 74, of Minden, passed away on Saturday, February 17, 2018 at CHI Health – Good Samaritan in Kearney. Funeral services will be held at 11:00 a.m. on Friday, February 23, 2018 at the Craig Funeral Home in Minden with the Rev. Donald Hunzeker officiating. The family requests those in attendance wear Husker apparel. Private family burial will be held at a later date in the Norman Cemetery. There will be no visitation as the family is honoring Wesley’s wish to be cremated. Wesley was born in Norman, NE on September 5, 1943 to John B. and Elsie V. (Podewitz) King. He grew up in the Norman area and spent his life in Kearney County. He received his education in Norman and Minden. He was united in marriage to Joyce Peters in 1966. They were later divorced. He married Kathy Struss in 1979 and they divorced in 2016. Wes lived all of his adult life in Minden. He was employed by Central Public Power and Irrigation District. He also owned King’s Antiques. He was baptized and confirmed at the Falun Lutheran Church in Norman. Wes loved sports and participated in wrestling and football, he was very good at both. As an adult, he played overhand softball on the Norman team with his brother Bob. Wes was the catcher. He also loved going to auctions, refinishing antiques and wood working. The last year and a half he enjoyed being in the company of Joyce. Wes loved life and enjoyed staying busy. He was always ready and willing to help anyone. Above all, he loved his family! Survivors include his special friend, Joyce Carder of Minden; sons, Todd King of Hastings, John Kincaid of Oklahoma, and James Struss of Hastings; daughters, Jodie King of Gibbon, Dawn Hunt of Omaha, Christina Bergmann and Kaycie Hibbs, both of Lincoln; 22 grandchildren, 20 great-grandchildren; brother, Bob King and wife Barb of Minden, Sisters, Mae Smith and husband Bill of Elwood, Marilyn Dolloff and husband Marvin of Kennsett, IA and Ann Walter and husband Del of Raymond, NE as well as a host of nieces, nephews, other relatives and friends. He was preceded in death by his parents, brother Billie King and wife Joyce; sister, Lonora Gentert and husband Jim and brother-in-law, Dwayne Walter and one great grandson. Memorials are suggested to the family for later designation. Craig funeral home is in charge of the arrangements.

The family of Wesley H. King created this Life Tributes page to make it easy to share your memories.

Wesley Howard King, 74, of Minden, passed away on Saturday, February...

Send flowers to the King family.