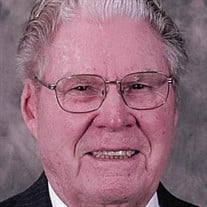 Willard Lynn Olson, 96 years of age, of Minden, Nebraska, passed away on Tuesday, August 7, 2018 at Bethany Home in Minden. Funeral services will be held at 11:00 a.m. on Monday, August 13, 2018 at the Westminster United Presbyterian Church in Minden with Rev. Daniel Davis officiating. Private family interment will be held prior to services at the Minden Cemetery. Visitation will be held from 3:00 to 5:00 p.m. on Sunday, August 12, 2018 at the Craig Funeral Home in Minden. Willard was born on October 6, 1921 at his home south of Minden, Nebraska to Martin and Ida (Reitan) Olson. He grew up with his younger twin brother, Wayne Olson, on the family farm. He attended eight years of District 34 country school southwest of Minden and then graduated from Minden High School in 1939. His father passed away October 1939 at which time he became a farmer for three years. He was then drafted into the U.S. army for three and a half years. In 1947, he went to work for Carl Anderson in Lincoln, Nebraska as an auto electric and speedometer technician for eight years. Willard met Ethel Simnitt, who was working in Lincoln and they were married on March 4, 1950. Willard got a job with United Airlines as a Radio, Electric, and Instrument Tech and they moved to California in 1955. Willard and Ethel were blessed with a son, Greg and a daughter Karen. He retired in 1987 after working for UAL for 32 years. He also spent time working for a real estate service. After living in Sunnyvale, California for 48 years, Willard said, “We are going home,” and moved to Minden in 2003. While in Minden, he spent his time playing Some-R-Set with his brother and the guys at the senior center and tending to his lawn and garden. He also enjoyed traveling and spending time with his family. Willard joined the Masonic Lodge in 1950, the Scottish Rite in 1980, and was a member of the American Legion. Survivors include his son, Greg Olson of Minden; daughter, Karen Olson and her wife, Sue Osterholt of Chico, CA; three grandsons, Matt Olson and his wife Samantha of Parker, CO, Mike Olson and his wife Marisa of Littleton, CO, and Aiden Osterholt of Chico, CA; three great granddaughters, Reese and Quinn Olson of Parker, CO and Kaelynn Olson of Littleton, CO; one great grandson Rylann Faber of Littleton, CO; sister-in-law, Leora Simnitt of Green, KS and sister-in-law, Connie Brown and husband, Norman of Green, KS; as well as a host of nieces, nephews, other relatives and friends. He was preceded in death by his parents, wife, brother, and brother-in-law, Myron Simnitt. Memorials are suggested to Westminster United Presbyterian Church, Bethany Home, or to the Minden Senior Center. Tributes of memory can be shared with the family at craigfunerals.com Craig Funeral Home is in charge of the arrangements.

Willard Lynn Olson, 96 years of age, of Minden, Nebraska, passed away on Tuesday, August 7, 2018 at Bethany Home in Minden. Funeral services will be held at 11:00 a.m. on Monday, August 13, 2018 at the Westminster United Presbyterian Church... View Obituary & Service Information

The family of Willard L. Olson created this Life Tributes page to make it easy to share your memories.