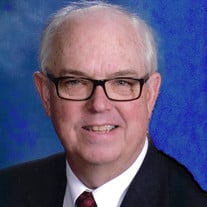 William “Bill” T. Johnson, 68, of Minden, passed away on Monday, May 27, 2019 at CHI Health - Good Samaritan Hospital in Kearney after a year-long battle against cancer. Services will be held at 10:30 a.m. on Saturday, June 1, 2019 at the Minden United Methodist Church with the Rev. Peter Choi officiating. Interment will be held following services at the Minden Cemetery. Visitation will be held on Friday, May 31, 2019 from 4:00 to 6:00 p.m. with the family present from 4:00 to 5:00 p.m. at the Craig Funeral Home in Minden. Memorials in Bill’s honor are kindly suggested to the Minden United Methodist Church, or to the Minden Public Schools Foundation. Craig Funeral Home is in charge of the arrangements. Bill was born September 12, 1950 to Dale W. and NaOmi (Geis) Johnson in Minden. He attended school in Minden and graduated with the class of 1968, earning many athletic honors. He was awarded the Hastings Tribune “Athlete of the Year” in 1968, and he holds the honor of being the 4th leading scorer of all time at MHS. He attended Hastings College, where he played basketball all four years scoring 1,630 points and earning many more basketball honors. He graduated in 1972 with a Bachelor’s in Education. He was united in marriage on May 28, 1972 to Sandra Granger. To this union, one son, Scott, was born. Bill spent his entire career of almost 47 years working at the Minden Exchange Bank & Trust Company. Bill was very involved in the community. He was a lifelong member of the Minden United Methodist Church where he served on many committees. He was one of the charter members of the Minden Optimist Club. He currently was treasurer of the Minden Public Schools District, and was President of East View Court Board, and had served on the Minden Country Club Board. Bill thoroughly enjoyed golfing, watching any sporting event, socializing with his many friends, and following his grandchildren’s activities. Bill was an amazing grandpa, and he absolutely adored his three grandchildren. He loved attending all of their events, teasing them, joking with them, loving them and spoiling them rotten. Bill was preceded in death by his parents and grandparents. Survivors include his wife Sandy of 47 years; son, Scott Johnson and wife Jamie of Minden, three grandchildren: Ryan, Alex and Regan Johnson; brother, Tom Johnson of Colorado; sister-in-law and brother-in-law, LaRae and Cal Worden of Norfolk; step brother-in-law, Ellery and Joyce Peterson of Kearney; one nephew, three nieces, two step-nephews, and three great-nieces; as well as a host of close friends. Tributes of memory can be shared with the family at www.craigfunerals.com.

The family of William "Bill" T. Johnson created this Life Tributes page to make it easy to share your memories.