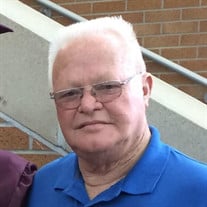 Willis Budd, 78 years of age from Minden, NE died on Friday, September 16, 2016 at Kearney County Health Services-Hospital in Minden. Funeral services will be on Wednesday, September 21, 2016 at 10:30 a.m. at the Westminster United Presbyterian Church in Minden with Rev. Dan Davis officiating. Graveside services will be at 2:30 p.m. at Fort McPherson National Cemetery in Maxwell, Nebraska. Visitation will be at the Layton-Craig Funeral Home in Minden on Tuesday from 4-6 p.m. Willis Leroy Budd was born in Yellow Dog Canyon, Custer County, NE on October 20, 1937 to Gerald and Willamine (Campbell) Budd. At a young age his family moved to Iowa. He attended Glenwood High School, graduating in 1955. While in high school he worked at Phily’s Recreation Parlor and was a great pool player. He joined the Navy in 1955 and was discharged in 1964. He served aboard the USS Kenneth Whiting and USS Bon Homme Richard. While he was stationed at Great Lakes he met Sonja Estep. They married on May 5, 1961. They transferred to Yokosuka, Japan. After discharge, they moved to Glenwood, IA where he worked as an electrician wiring nursing homes in Glenwood and Wisconsin. In 1967, they moved to Kearney County, where he worked at Minden Beef. He then worked for Kenny Dornhoff and later Mick Ryan until he retired. He enjoyed watching and talking about sports and liked to attend his grandkids sporting events. He enjoyed farming and helping Terry Sorensen with harvest after his retirement. He also hunted deer, pheasants and quail in his younger years. He was an avid Minden Whippet fan and liked to sit at the top row of the bleachers in the gym. He loved to read and especially enjoyed Westerns. He is proceeded in death by his parents and brothers, Loyd and Gary. He is survived by his wife, Sonja of 55 years, daughter, Geni and husband Mike Evans of Gretna, NE; son Kevin Budd and wife Marcie Schwalm of Orlando FL and three grandchildren, Jordan Evans of Chicago, IL, Tanner Evans of Des Moines, IA and Hayleigh Evans of Fort Collins, CO. His brothers, Hank (Joyce) of Baton Rouge, LA and Jim (Myrna) of Glenwood, IA. Sisters, Joan (George) Sorensen of Audubon, IA, Betty (Bob) Hauger of Tabor, IA and many nieces and nephews, cousins and friends.

The family of Willis Budd created this Life Tributes page to make it easy to share your memories.

Send flowers to the Budd family.